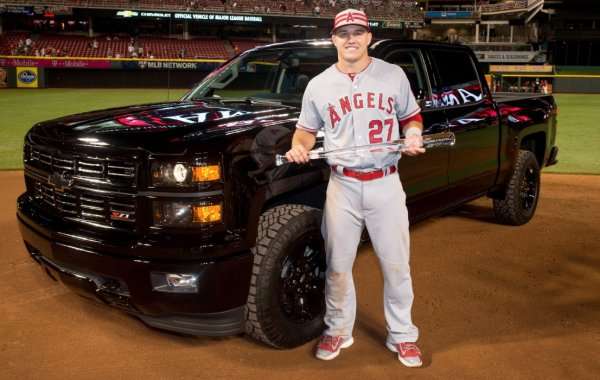 Anaheim Angels center fielder Mike Trout had a chance Tuesday to become the first owner of a 2016 Chevrolet Camaro, but he passed on it – opting instead for a Chevrolet Silverado Midnight Edition for his MVP award winning performance in the Major League Baseball All Star Game.
Advertisement

As part of their sponsorship of Major League Baseball, part of the award for being named the most valuable player in the annual All Star Game is a free General Motors vehicle. In 2014, Mike Trout took home the MLB All Star Game MVP award and with it came a brand new Chevrolet Corvette Stingray.

For the 2015 MLB All Star Game, the winner of the MVP award got to pick between a new Chevrolet Silverado 1500 Midnight Edition or a 2016 Chevrolet Camaro SS Convertible. Had the winner picked the Camaro, he would have been the first official owner of a 6th generation Camaro.

Trout’s Big Night
Mike Trout is one of the biggest names in pro baseball today so when he turned the 4th pitch of the 2015 MLB All Star Game into an early lead for his team with a home run blast, it came as no big surprise. Trout also added a walk later in the game which turned into a run scored for the American League team – leading the way to a 6-3 win for the AL.

For this performance, Mike Trout was named the 2015 MLB All Star Game Most Valuable Player – making the Angels outfielder the first ever back to back winner of the award.

“Mike’s on-field performance was All-Star caliber and worthy of one of Chevrolet’s All-Stars,” said Brian Sweeney, U.S. vice president, Chevrolet, which has been the Official Vehicle of Major League Baseball® since 2005. “Chevrolet also encourages future All-Stars through our more than 1,500 dealers who support Chevy Youth Baseball.”

Which Chevy for Free?
After the game, as part of the announcement of Trout winning the MVP award, a Chevrolet Silverado Z71 Midnight Edition and a 2016 Chevrolet Camaro SS Convertible drove out onto the field. Trout got to pick which vehicle he wanted as part of his award, and after picking the sports car in 2014, the hard-hitting baller picked the sinister looking Chevy pickup.

While I can understand why the insanely wealthy baseball player, who presumably already has a Corvette Stingray in the garage of his mansion, would opt for the swanky pickup over the drop-top Camaro, it hurts the heart of Camaro fans everywhere that someone turned down the opportunity to be the very first person to assume ownership of a 6th generation Camaro.

The odds are pretty good that the first person to own a 6th generation Camaro will be someone who is willing to pay top dollar at a high profile collector’s auction.