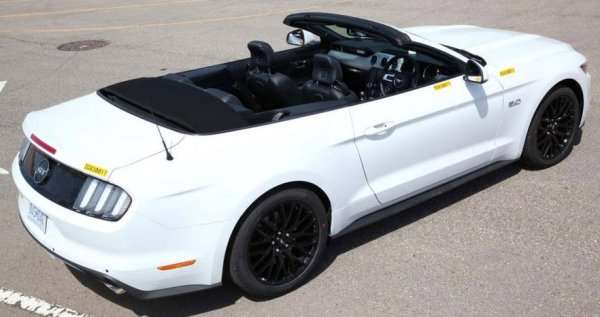 The 2015 Ford Mustang will be the first ever marketed on a global scale including a variety of right hand drive markets and the Motor Company has rolled out an image of the first ever production-based right hand drive Mustang that will lead to consumer models for Australia, the UK, India and other markets where they drive on the “wrong side of the road”.
Advertisement

The Ford Mustang is well known around the world as being one of the ultimate American performance cars and with a half century of go-fast fun, it is easy to understand why gearheads in other countries love the Mustang as much as we do. While it might be hard to believe, in the past 50 years Ford has never marketed the Mustang to countries outside of North America and specifically, they have never offered a factory built right hand drive Mustang. There have long been companies that would convert a Ford Mustang (or almost any vehicle) to right hand drive for the right price – but that is expensive and inconvenient.

However, that will all change with the 2015 Ford Mustang, as the S550 Mustang will be the first marketed around the world for both left and right hand drive areas. This will make it easier for everyone around the world to buy a new Ford Mustang – particularly for those folks who drive on the left side of the road.

The First Right Hand Drive Mustangs
The image above shows one of the first right hand drive Ford Mustangs ever built for the purpose of foreign market testing. While I would suspect that in the past 49 years, Ford has built at least one right hand drive Mustang – likely as little more than a one-off concept car or styling study – this is the first Mustang built with the wheel on the right side that would lead to a full run of similarly equipped production vehicles. This car will be shipped to one of the 25 right hand drive countries in which the 2015 Mustang will be sold for on-road testing.

This 2015 Ford Mustang and the rest of the next generation Mustang coupes and convertibles will be relatively the same as the left hand drive Mustangs sold here in the US. Ford designed the S550 Mustang to be sold on a global level so there should be very few changes required to sell the same Mustang that we get in the US in Australia, the UK, China, Germany or anywhere else…shy of moving the steering wheel components, the pedals and the gauges from the left side to the right side.

There are Some Changes for Overseas Mustangs
When the 2015 Ford Mustang reaches the many overseas markets – both left hand drive and right hand drive – there will be a few changes. Most notably, the 3.7L V6 that serves as the base model engine here in the US will likely be excluded from most other markets. Those folks will instead get to pick between the 2.3L EcoBoost 4-cylinder or the same 5.0L V8 that powers our Mustang GT.

Another interesting aspect of the right hand drive 2015 Ford Mustang Convertible shown above is that it has solid white taillights. I would expect that these unique white lenses use LED technology to light up bright red when activated in accordance with local laws of the areas in which this Mustang will be tested and sold. Lighting regulations vary from country to country so I would expect that some countries will get the same red taillights that we get here in the US while other markets will get the white taillights shown above. I think that the white taillights look pretty cool – especially on a white car – and I wouldn’t be surprised if we saw American 2015 Mustang owners swapping to these foreign taillights to add a touch of uniqueness at the local car show.

If nothing else, this image is a sign that those markets which require right hand drive models are that much closer to being able to go out and buy a 2015 Ford Mustang.