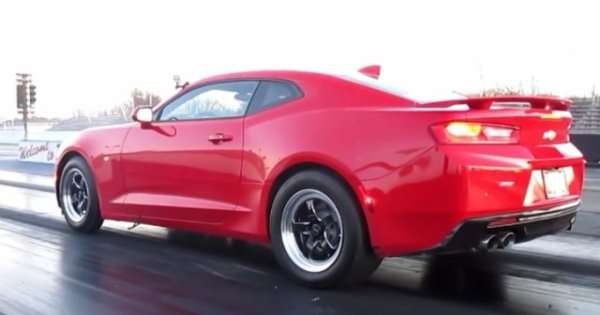 Less than a month after the first 2016 Chevrolet Camaro was delivered, one owner has already put their 6th generation GM muscle car well into the 10-second quarter mile range – making it the first 2016 Camaro to run in the 10s and for now, the quickest 6th gen in the world.
Advertisement

The 2016 Chevrolet Camaro SS is more powerful and lighter than the 2015 Camaro SS, so we all figured that the new model would get down the quarter mile quicker than the previous generation. The folks at Hot Rod showed that a factory stock 1SS with the automatic transmission can run in the 12.20 range, but that wasn’t fast enough for the owner of this bright red 2016 Camaro. In fact, he didn’t even bother to spend time at the track in stock form. Instead, he had the car delivered to a performance shop for some light modifications and a set of sticky drag racing tires before heading to the track for the first time.

The 1st 10 Second 2016 Camaro
This red 2016 Chevrolet Camaro was purchased and taken right to B&R Performance, where it was fitted with a set of lightweight drag racing wheels with skinnies up front and what looks to be a full slick out back. It could be a drag radial, but I don’t think that I see any “tread” on the rear tires. In any case, B&R then tuned the engine computer to optimize output – likely creating custom engine tunes with and without the nitrous setup with 150 horsepower jets.

There are no power figures in the video details, but figure that this 2016 Camaro is making at least 600 horsepower at the crankshaft, with 455 official horsepower and another 150 added with the bottle – and that is before the engine tune. I wouldn’t be shocked if this car was making upwards of 650hp with the tune and the bottle, but that is just speculation.

What isn’t speculation is the fact that this 2016 Camaro launches hard enough to lift the front tires and it gets down the quarter mile in a smokin’ quick 10.60 at 129 miles per hour. Without the bottle, this same car with just a tune and the wheel/tire combo ran an 11.77 at 119 miles per hour, so the nitrous setup cut just over a second and added 10 miles per hour.

Yet another GM performance engine that clearly loves the bottle!

According to the person who published this video, the 10.60 run makes this the first 2016 Camaro SS to run in the 10s and I’ve yet to see a quicker run, so I am inclined to believe that for now, this is the quickest 2016 Camaro in the world. Anyone who knows of one quicker is welcome to send us a link to a video and I will feature that one as well!

Watch with the Volume UP
It is impressive that the 2016 Chevrolet Camaro SS with tires, a tune and a nitrous setup runs 10.60s, but the sound of this Camaro launching and screaming down the track is every bit as impressive. The new Camaro sounds wicked idling at the line and when the green light drops – the LT1 roaring through the dual mode exhaust is a thing of beauty. Also, this video gives us a chance to hear the 8-speed automatic in action. In short, speakers up.