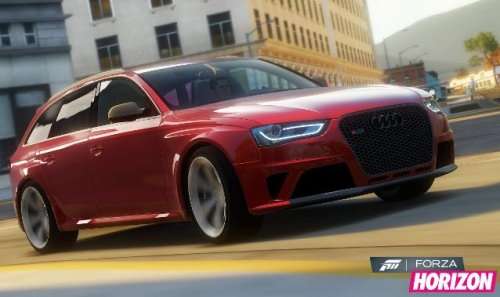 The folks at Turn 10 have just announced the details on the March Meguiar’s Car Pack for Forza Horizon with 6 new vehicles ranging from a compact rally car to an ultra high performance SUV storming on to the festival racing scene – along with an extra car for those Horizon gamers who bought into the season pass program when the game was released.
Advertisement

The March Meguiar’s Car Pack for Forza Horizon begins with the 1998 Nissan R390 which was the one-off road going version of the LeMans winning Nissan R390 GT1. The fact that the R390 was basically a LeMans race car with minor modifications made for street driving should make it one serious performer in Forza Horizon.

After the Japanese R390, the March Car Pack introduces 5 European vehicles to the roads of the Horizon Festival beginning with the 2003 Ferrari Challenge Stradale and moving a year forward to the race ready 2004 Peugeot 206 rally car.

Next, the Mercedes Benz G65 AMG is a boxy SUV intended for high performance street fights but the advanced all wheel drive system and off road ready suspension setup should allow the AMG G wagon to handle well both on and off road.

The Meguiar’s Car Pack for Forza Horizon finishes up with a pair of brand new European high performance models that Americans may call sport wagons while the name “avant”, “5-door”, “3-door” or “hatchback” might be used to avoid the negative stigma associated with the word wagon – even among the these high performance models.

First up is the 2013 BMW M135i which is serving as the entry level M spec performance model and a replacement to the BMW 1 Series M Coupe. As a big BMW fan and a regular Horizon gamer – I look forward to using the new M135i to tear up the competition in the online, virtual world of the Horizon Festival.

The other sport wagon is the 2013 Audi RS4 Avant (shown above on the right) which packs 400 horsepower of V8 fun channeled through the advanced Audi Quattro all wheel drive system for supreme handling and acceleration. Like the M135i, the RS4 Avant is an awesome high performance sport wagon and having it included in the March Car Pack will likely please the Audi enthusiasts who play Forza Horizon.

Those who bought into the Forza Horizon Season Pass program when the game was released will get the March Meguiar’s Car Pack for “free” along with receiving an addition bonus car in the form of the 2010 Joss JT1. The video showing the cars and sport utility vehicle of the March Meguiar’s Car Pack doesn’t offer us a look at the 2010 Joss JT1 but having experienced that Aussie supercar in Forza Motorsport 4 – it will offer another ultra high performance car for Horizon gamers to enjoy. If, of course, they purchased the Season Pass.

The March Meguiar’s Car Pack for Forza Horizon carries a price of 400 Microsoft points while the cars can be purchased individually for 240 MS points each. Based on the per unit price, it just makes better financial sense to purchase the whole package if you want at least two of those cars in your virtual garage. The March Car Pack will hit the Xbox Live Marketplace on March 5th.

Check out the release video showing the 6 cars included in the regular March Meguiar’s Car Pack for Forza Horizon below.