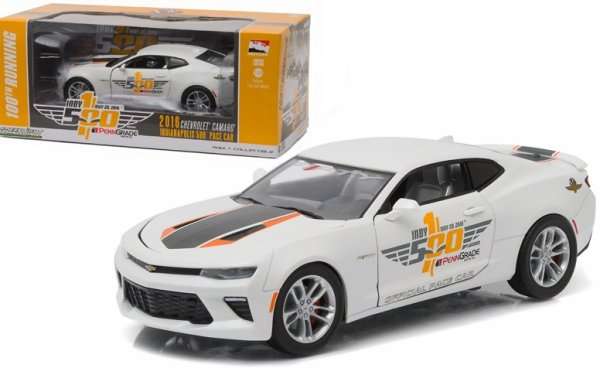 A Look at the Diecast 6th Gen Chevrolet Camaro Options

Over the past few months, I have featured a handful of diecast toy examples of the Dodge Challenger and Charger Hellcat models, but after receiving a great many questions on the availability of a small scale 6th gen Chevrolet Camaro – today I bring you a look at the top options for those who collect miniature Camaros.
Advertisement

I am a very active collector of small scale diecast cars – toys, if you like – and I collect specifically Mopar vehicles. I am also very active in the Mopar enthusiast community, so as the first Hellcat Challenger and Charger toys have hit the market, I have rushed to add them to my collection along with bringing the existence of those cars to the attention of interested Mopar fans and collectors.

After doing a few articles about the newest Hellcat toys, I received a collection of questions about the availability of toy versions of the new Chevrolet Camaro, so I did a little hunting and found the top options for those who want a realistic-yet-tiny version of the new Camaro – in 1/18, 1/24 and 1/64 scale.

Hot Wheels and Greenlight Lead the Way
As was the case with the earliest Hellcat toys, the first 6th gen Chevrolet Camaro toy came from Hot Wheels. The Hot Wheels ’16 Camaro SS launched last year as part of the Muscle Mania series in both blue with white stripes or red with white stripes. These Camaros can be found for around a dollar at any major retailer, but in terms of detail, the Hot Wheels are a bit on the lackluster side.

Those who want a little sharper detail from a 1/64th scale car can look to the folks from Greenlight Collectables, who have rolled out a collection of 2016 Camaro diecasts. The first 2016 Camaro from Greenlight was the Unveiling Edition, which has a Camaro-branded card. Greenlight then added a 2016 Camaro SS Fifty Anniversary Edition Indy Pace Car, a Gulf Racing livery Camaro and a Bumblebee Transformers Edition Camaro – with more on the way.

The Greenlight 1/64 scale 2016 Camaro costs more than the Hot Wheels version – with the store cost generally being anywhere from $5.99 to $7.99, but the Greenlight cars are far more detailed inside, outside and under the opening hood.

Greenlight Offers More Size and Detail
Those Camaro fans and collectors who want a diecast version of the 2016 Camaro SS with a bit more detail can opt for the Greenlight 1/24 scale Indy Pace Car (shown above). Like the 1/64 scale car, this 2016 Camaro SS is based on the 2016 Indy 500 Pace Car – which is built on the Fifty Years Edition Camaro.

The Greenlight 1/24 scale car has an opening hood, which shows off the LT1 engine of the 2016 Camaro SS, along with opening doors to get a better look at the highly detailed interior. This larger car is the most detailed 2016 Camaro diecast toy I am familiar with thus far, and with a price that ranges from $25.99 to $35.99 online, it is still reasonably affordable.

Maisto Makes the Biggest New Camaro
Finally, for those Camaro lovers who want the larger possible diecast replica of the 2016 Camaro SS, the folks at Maisto offer a 1/18 scale version of the new Chevy muscle car in bright red. I have a few Maisto 1/18 scale cars in my collection and while they are generally not as detailed as brands like Greenlight, they are nice, solid cars with accurate details inside and out.

As the largest 2016 Camaro diecast, the Maisto piece is currently most expensive with a retail price of $41.99 on Walmart.com. However, Sam’s Club frequently offers cars from these Maisto lines and when they do, they generally sell for less than $20.

Thanks to Camaro collector extraordinaire Timothy for the information on the available 2016 Camaro diecast options!