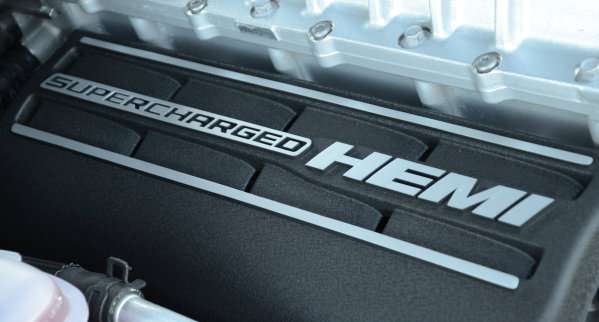 Jeep Hellcat Trackhawk Could Debut in April, Deliveries by September

Based on an interview with Jeep CEO Mike Manley, the Hellcat-powered Grand Cherokee Trackhawk could make its formal debut at the 2017 New York International Auto Show in April and the first production units could reach dealerships by September 2017 – meaning that the world’s most powerful SUV could be less than a year away from hitting the streets.
Advertisement

Back in January, Jeep boss Mike Manley stated that there would be a Hellcat-powered Jeep Grand Cherokee available for sale by the end of 2017. Since then, we haven’t heard a whole lot from FCA about the supercharged super-Jeep, but while speaking with The Detroit News at the LA Auto Show, Manley offered some new timing tidbits on the Hellcat Jeep Grand Cherokee. Also, this interview seemingly confirms the Trackhawk name, although the future high performance Jeep SUV could still have some other name when it goes on sale.

Trackhawk Name Confirmed – Kind Of
Before getting into the juicier details of the 2018 Jeep Grand Cherokee with Hellcat Hemi power, it should be pointed out that this is seemingly the first time an FCA official has gone on the record to talk about the “Trackhawk”. That name first surfaced via the rumor mill with support from unnamed inside, but even when Manley confirmed the future of a Hellcat-powered Jeep Grand Cherokee back in January, the Trackhawk name wasn’t actually used – he just said that there would be a Hellcat Jeep by the end of 2017.

However, when speaking with The Detroit News, Mike Manley referred to the Hellcat-powered Jeep Grand Cherokee as the Trackhawk, although he also stated that a high performance Jeep could be called the “Trackhawk or something else”. That muddies up the waters a bit, but this is the first time that an FCA official has given a name to the supercharged Grand Cherokee that we are all dreaming of. The Hellcat Jeep Grand Cherokee might be called something other than the Trackhawk, but with Manley calling it that in an interview - I believe that that could be the official name of this wicked sport utility vehicle.

Debuting in New York
According to Mike Manley, FCA is planning on a formal introduction of the Jeep Grand Cherokee Trackhawk at the 2017 New York International Auto Show. Considering that the Hellcat Challenger made its debut in the Big Apple, introducing the Hellcat Jeep in New York makes sense, while leaving plenty of time for a debut later in the year. Remember, Manley said that the Hellcat Jeep would arrive by the end of 2017, so an April introduction of the production Jeep Trackhawk would leave plenty of time to get the vehicles to market by the end of the year.

In fact, Manley expects that the Jeep Grand Cherokee Trackhawk could arrive in dealerships as early as September or October, so if you are eagerly awaiting your chance to buy the world’s most powerful SUV, your wait could have less than a year remaining.

What to Expect
When the Jeep Grand Cherokee Trackhawk with the Hellcat Hemi debuts in New York, it will almost certainly be a 2018 model year vehicle, especially with the expectations of deliveries beginning in September or October. We can expect that the Hellcat Jeep will have the 6.2L Hellcat Hemi, but there has been speculation that the power levels could be less than the 707 in the Charger or Challenger in an effort to preserve the all-wheel drive components. Of course, the Trackhawk Jeep is expected to be all-wheel drive and the 8-speed heavy duty automatic transmission from the Challenger and Charger will be tasked with moving power to the wheels.

The Hellcat Jeep will likely have a similar Brembo braking system with massive 15+ inch rotors up front, an adaptive suspension setup and the stickiest tires possible - l just like the Hellcat Challenger and Charger.

Finally, the Trackhawk Jeep will likely have a heavily appointed interior and some exterior cues to make it a little more aggressive looking than the SRT 392 Grand Cherokee. Most notably, expect a hood that gets plenty of air in and out of the engine bay.