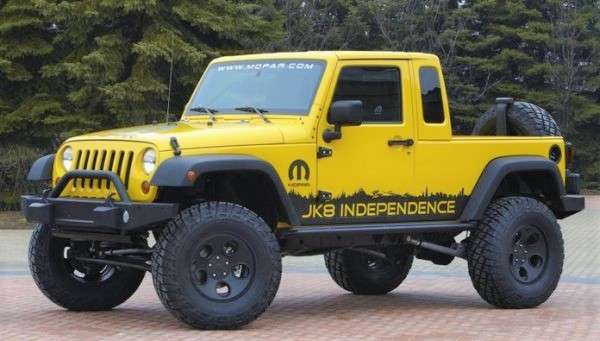 FCA announced a billion dollar investment in a handful of American production facilities yesterday, but more importantly, the automaker confirmed their plans to produce the long-rumored Jeep pickup truck and a new Wagoneer and Grand Wagoneer – while offering a brief outline of where these vehicles will be built.
Advertisement

There have long been rumors that FCA was planning to finally launch a Jeep Wrangler based pickup truck along with a new, range-topping Jeep Grand Wagoneer. With FCA’s announcement of a $1 billion investment spread across a few production facilities in Michigan and Ohio, the automaker confirmed that there is indeed a new Jeep Grand Wagoneer on the way as well as a midsized Jeep pickup – although the company hasn’t stated that it will be a Wrangler-based pickup.

“The expansion of our Jeep lineup has been and continues to be the key pillar of our strategy. Our commitment to internationalize the Jeep brand is unwavering, and with these last moves, we will finally have the capacity to successfully penetrate markets other than the U.S. which have historically been denied product due to capacity constraints. In addition, these all-new products will reach new consumers, as well as those that have been part of the Jeep tradition,” said FCA CEO Sergio Marchionne.

These investment upgrades are expected to be completed by 2020, so we could see the vehicles stemming from this billion dollar investment in 2020 or 2021.

The Billion Dollar Jeep/Ram Investment
Yesterday morning, FCA announced that they were investing $1 billion in the Warren (Michigan) Truck Assembly Plant and the Toledo Assembly Complex South Plant. Part of that money will be used to “retool and modernize” the Warren truck plant to build the new Jeep Wagoneer and Grand Wagoneer, along with preparing the Warren plant to build the Ram Heavy Duty pickups which are currently built in Mexico. The other part of that billion dollar investment will go to retool and modernize the Toledo Assembly South Plant to build a new Jeep pickup, and when combined with the impact of the investment at the Warren plant – this billion dollar production investment will add 2,000 jobs in the Michigan-Ohio area.

In other words, this news is a huge deal for the local autoworkers union and the scores of experienced workers around Detroit who are planning for their futures in this area. Right now, things are looking pretty bright for FCA’s UAW workers in and around the Motor City, with increased job security and more jobs.

Wagoneer, Grand Wagoneer, Jeep Pickup
In addition to offering up some great news for the local union autoworkers, this FCA investment news is big for the Jeep enthusiast community.

We have been speculating for years about the existence of a Jeep pickup and the Jeep community has been pleading for such a vehicle since the Jeep Comanche was killed off back in the early 1990s. With this news, we know that there is definitely a Jeep pickup coming, but we don’t for sure if it will be a Wrangler pickup. Another recent investment announcement focused on the future of the Wrangler, which is slated to be built in the Toledo Assembly North Plant, but this Jeep pickup investment is directed at the South Plant.

(Note: The image above shows the Mopar JK8 Independence SEMA show vehicle – not a production Wrangler pickup. The actual Jeep pickup discussed here might not look anything like the truck shown here.)

The bottom line is that FCA is investing more money in American production and adding 2,000 more American jobs while introducing a handful of Jeep models that the community has been demanding for years – and while moving more Ram truck production to the USA.

FCA is doing their part to Make American Great Again.