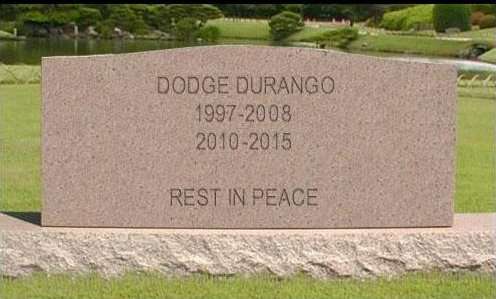 Since Fiat SpA took over the reins of the Chrysler Group, one of the key efforts has been to eliminate redundancies across the various brands and with the Dodge Durango and Jeep Grand Cherokee being so similar, it makes sense that one of them would be removed from the lineup. The Jeep Grand Cherokee is one of the most awarded and bestselling SUVs since essentially introducing the sport utility vehicle decades ago so it wouldn’t make any sense to kill off the Jeep. On the other hand, the Dodge Durango has not seen nearly the success since being introduced in the late 1990s, so bringing about (another) end to the Durango seems like the easy choice. Therefore, when the Jeep Grand Cherokee receives a new platform and likely a new design for the 2016 model year, the Dodge lineup will be devoid of the sporty Durango.

Sadly, if the Dodge Durango is really going to meet another end in 2016, there is a good chance that the high performance Dodge Durango SRT8 will likely never see the light of day. While the Jeep Grand Cherokee SRT8 is 100% awesome, the same 6.4L Hemi and advanced all wheel drive system fitted into the street-sport designed Durango would make for an interesting addition next to the Jeep SRT8 which is technically better designed for off-road use. I have seen images of a Dodge Durango test vehicle with the hood up and the 6.4L Hemi V8 used in the Charger, Challenger, 300C and Grand Cherokee SRT8 clearly visible – which led me to believe that the Durango SRT8 was on its way. However, with only three model years worth of Durango seemingly left (2013, 2014, 2015) until the Dodge SUV meets its demise – Mopar lovers will likely not get their chance to purchase a 470hp factory-built Durango.

When the 2016 Jeep Grand Cherokee arrives, we can expect it to come in both rear wheel drive and advanced four wheel drive variants with the buyers’ choice of a V6 or V8 engine option. If we had to guess, those engines would be future forms of the 3.6L Pentastar V6 and the 5.7L Hemi V8 found in the current Grand Cherokee – hopefully packing more power than the current engines. These engines will likely utilize some modern induction technology from across the pond which could include Fiat’s MultiAir technology or maybe even forced induction, so that these new engines would offer as much improvement in fuel economy as they do in power output. While we can expect that the 2016 Grand Cherokee will only offer self-shifting transmission, the popular Jeep could benefit from a version of the 8-speed automatic transmission currently at work in the Dodge Charger and Chrysler 300.

We should keep in mind that a great many things could change between now and 2016 but with the news of the Durango’s demise along with the Grand Cherokee’s next generation coming directly from company boss Sergio Marchionne himself – we can expect that there is truth to this information.

Anonymous wrote on June 5, 2012 - 5:27pm Permalink
Good dodge durango was never a great seller here in Ontario. Jeep is the brand that everyone recognizes as THE SUV.
IndyD wrote on June 14, 2012 - 12:22am Permalink
Since your primary cutsie graphic of the gravestone is incorrect on all of the timelines and generations, you have no credibility and deserve zero respect on this story or topic. If you can't fact check a photo you have created yourself, how can the public trust any of the "facts" contained within the storyline you provide. Answer = they can't.
Bradley wrote on November 30, 2013 - 11:18pm Permalink
Will there be a 2015 Dodge Durango or is it totally replaced now?
dujon linton wrote on March 7, 2014 - 9:00am Permalink
if the durango is getting replaced, its only fair that the make a seven seater in the jeep brand.
Rob wrote on April 18, 2014 - 10:48pm Permalink
Yeah. Rumor has it, they'll call it.. the grand caravan. ;-)
Will wrote on March 24, 2015 - 4:40pm Permalink
Not funny dude. Caravan? I had my heart set on the Durango.
Michael Smith wrote on October 14, 2014 - 10:26pm Permalink
I work in promotions for five manufacturers in motorsports. The latest rumors for Chrysler is that Dodge will be the high performance division. The seven seat version of the Jeep Grand Cherokee that will replace the Dodge Durango is expected to be named the Jeep Grand Wagoneer.
Walter J Brembs wrote on February 15, 2015 - 6:14pm Permalink
I thank Mr. Sergio Marcionne in shedding weight for Jeep vehicles. I will wait till it happens -will get the 2016 Jeep Grand Cherokee Laredo RWD. The current weight of 4,545 is nuts. A higher MPG is necessary. And yes, a power driver seat should be included for this vehicle. A lower price tag for this model would boost sales. P.S. - My Dad, who came from Bavaria, Germany, loves the Brembo brake. He relates it to our last name,
Jay JOhnson wrote on January 14, 2017 - 5:24pm Permalink
This is hard to believe, since I have a 2016 Durango LTD and am ordering a 2017 R/T.