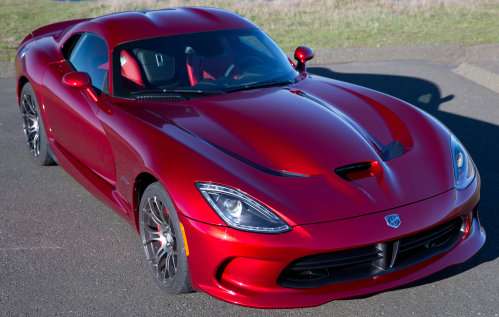 The initial batch of 2013 SRT Vipers is sold out, Viper Roadster coming soon

The first production run of the 2013 SRT Viper is nearing an end and all 800 of the new Vipers built have been spoken for with a surprising 80% of those 2013 Viper coupes being fitted with the high performance GTS package but more importantly – SRT boss Ralph Gilles has confirmed that a convertible should be available within the next few years.
Advertisement

The launch of the 2013 SRT Viper marks the first time that the Chrysler Group supercar has been introduced as a coupe and not a roadster/convertible but that didn’t slow pre-production sales. Chrysler’s first production run of the 2013 Viper brought 800 units to life and although deliveries have not yet begun, Ward’s Auto reports that these 800 new Viper Coupes have all been sold ahead of time by those approved dealers around the US. That likely comes as a disappointing bit of news for those who were storing away their nickels to buy the new Mopar supercar but with Chrysler expecting to make around 2,000 Vipers per year – there should be more SRT Viper Coupes rolling off of the Connor Avenue Assembly Line soon.

One interesting aspect of the sales from the first 800 examples of the 2013 SRT Viper sold is that a whopping 80% were ordered with the higher performance and more luxurious GTS trimline. The GTS package adds lots of leather and luxury on the inside, some unique body bits on the outside and a high tech adjustable suspension system that should make the GTS slightly more capable (although slightly heavier) than the base model Viper. However, the 2013 Viper GTS comes with a price tag that starts at $120,395 where the base Viper starts at “only” $97,395 so within the first 800 Viper orders, 640 or so of those new Mopar supercars cost roughly $23,000 more than other 160 new 2013 Vipers.

Even though the 2013 SRT Viper Coupe met the world with a great deal of positive press, the sports car world has been asking about a topless version of the mighty Viper. Considering that the convertible/roadster came first during the other 4 generations of the Viper it seems like a sure thing that the open air version would be in the works and according to Gilles – that topless Viper is on the way. The SRT boss explained to Ward’s that the 2013 Viper was initially designed to be a convertible but the design and build team opted to launch the coupe first so that the Viper GTS-R could be quickly moved into the world of endurance racing. The fact that the chassis was designed to be a convertible should make it very easy for the SRT engineers to put together a production-ready ragtop since there is no need for the engineers to rework the chassis to be strong enough to handle the power without the structural support of the roofline. This could also mean that when the SRT Viper Convertible arrives, it might not be much heavier than the coupe. In the case of many high performance coupes turned convertibles, the chassis has to be strengthened to handle the power and performance attributes one the roof has been cutaway – which often adds a bunch of weight. However, the fact that the chassis was designed for convertible duties could allow Chrysler to produce a Viper roadster that doesn’t bear the burden of that extra weight.

As we previously reported, the SRT brand has a planned refresh in 2015 that can almost only be the first facelift for the new SRT Viper and many (including yours truly) believe that this 2015 refresh will bring about the introduction of the SRT Viper Roadster. I used roadster rather than convertible because the initial Viper was introduced as a “roadster” and not a convertible. However, regardless of how Chrysler opts to name the topless Viper in 2015, we expect that it will be just as popular as the coupe that has taken the automotive world by storm.

Click any of the thumbnails on the right for a closer look at the 2013 SRT Viper GTS in Coupe form.