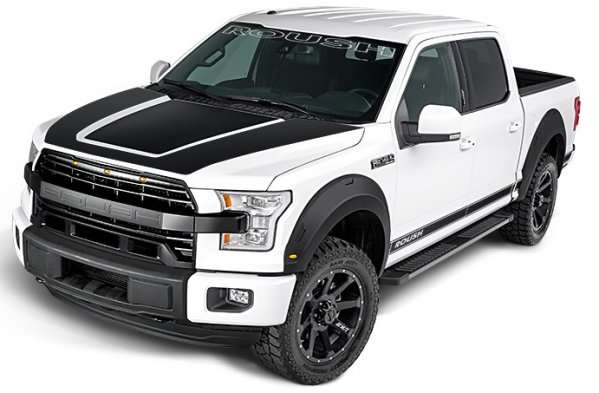 The next generation SVT Raptor might not hit dealerships for another year, but those 2015 F150 owners who want a more Raptor-like driving experience can turn to the folks at Roush, who have created a modern sport truck package that carries over many cues from the previous generation SVT pickup.
Advertisement

While the 2017 SVT Raptor F150 will almost certainly be a showstopper, we still don’t know exactly when it will arrive and with the previous generation Raptor being so popular, there is a big hole in the 2015 F150 lineup – and that hole will still be there for the 2016 model year. Fortunately, the folks at Roush Performance have just unveiled a new performance package that applies a great many cues from the previous Raptor to the new F150, creating a truck that is more capable off-road while also sporting a unique look inside and out.

Unmistakable Exterior Design
Like the Ford SVT Raptor, the 2015 Roush F150 has a unique exterior design that can be recognized day and night. This begins up front, where the big, bold Roush grille sports a set of clearance lights (just like the Raptor) while the large front wheel flares also have clearance lights. Those lights make it clear that this is no ordinary F150 at night, while the contrasting grille and flares give the Roush F150 a very muscular look during the day. The exterior package also includes a unique bumper cover, a Roush hood graphic, a Roush windshield banner, Roush side stripes, a Roush tailgate graphic, a Roush hitch cover and a Roush license plate frame.

Performance Upgrades
Next, while they could fit into the exterior design portion, these items on the 2015 Roush F150 are more about performance than appearance – although they help in both areas. A Roush performance exhaust system has been added with a side exit for improved sound and exhaust flow while a set of unique Roush 20 inch wheels wrapped in Mickey Thompson Baja 305/55/20 tires look great and provide solid grip in any conditions. Most importantly, a suspension setup similar to that found in the previous Raptor has been added, featuring Fox 2.0 performance series coilover dampers.

While the performance upgrades for the 2015 Roush F150 are fairly minimal, the wheels, tires and Fox suspension components should afford these specially equipped F150 pickups with the greatest off-road abilities of the modern generation…at least until the SVT Raptor arrives.

The Cost
The Roush F150 package with all of the components included above starts at $10,600, which obviously does not include the cost of the truck itself. If you were to build the truck shown above with the SuperCrew cab, four wheel drive and the 5.0L V8, the least expensive option would be the F150 XL, starting at $38,845. Adding the $10,600 Roush package onto that would bring about a total price of $49,445. So, for under $50k, you could have a 5.0L V8-powered Ford pickup that looks and likely rides a great deal like the previous generation Raptor.

This is a great option for someone who wants a Raptor-like 2015 F150, but who wants to avoid the high performance EcoBoost or the new 10-speed automatic transmission.