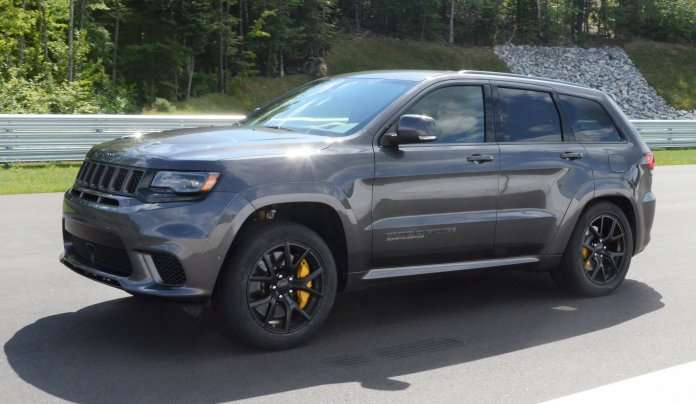 How the Jeep Trackhawk Blasts to 60mph in Less than 3.5 Seconds

The 2018 Jeep Grand Cherokee Trackhawk dashes from a stop to 60 miles per hour in 3.5 seconds with Hellcat power even though it weighs more than 5,000lbs – and last week, I had a chance to experience how easily this Mopar super sport utility vehicles leaves a stoplight.
Advertisement

The 2018 Jeep Grand Cherokee Trackhawk is powered by the same supercharged 6.2L “Hellcat” Hemi that motivates the Dodge Charger SRT Hellcat and Dodge Challenger SRT Hellcat, with the same 707 horsepower and slightly less torque (645 compared to 650) due to the SUV-specific exhaust manifolds. As you might imagine, the all-wheel drive Jeep weighs considerably more than either of the supercharged Dodge muscle cars, yet it still accelerates from 0-60mph in 3.5 seconds – or, at least 3.5 seconds is the official 0-60 time from Jeep.

In my experiences testing the 2018 Grand Cherokee Trackhawk on a closed circuit, I was able to easily hit 60 from a stop in just 3.5 seconds while also hitting 3.4 seconds on one run. Mind you, this was with myself and a passenger in the vehicle on an 80-degree day while literally hot-lapping the vehicle. Even with a hot engine and an extra body in the vehicle, I was able to get the Trackhawk to 60mph in just 3.4 seconds and some people report hitting 3.3 seconds in the same conditions.

On the other hand, my average 0-60 times with the Hellcat Challenger or Charger while testing tends to hover in the 3.6-3.7 range, so while the supercharged Jeep at least 600lbs heavier than the supercharged cars, it is a bit quicker in getting to 60. This is possible partially due to the advanced all-wheel drive system, but there is more to the Trackhawk’s incredible acceleration abilities than just spinning all four tires.

Launching the 2018 Jeep Grand Cherokee Trackhawk
While the combination of the 707 horsepower supercharged Hemi, the new heavier duty 8-speed automatic transmission and the advanced all-wheel drive system all play key roles in allowing the 5,000+ pound Jeep Trackhawk to hit 60 miles per hour from a stop in just 3.5 seconds, there is a bigger factor at play when comparing the Hellcat Challenger and the Hellcat Jeep.

The supercharged Jeep features a unique launch control system with the Torque Reserve feature. Torque Reserve helps the Trackhawk send more power to the wheels at the exact second that you launch by building boost prior to launch. When you launch a Hellcat Challenger, you are leaving the line at roughly 100lb-ft of torque and no boost, but when you launch the Trackhawk, the supercharged Hemi is making around 6.4 pounds of boost and with that boost comes roughly three times as much torque at the point of launch. In addition to launching with roughly three times more torque than the Hellcat Challenger or Charger, the Trackhawk’s Torque Reserve system shortens the period of time before peak boost and peak power are reached, so it leaves the line with more power and it reaches the peak in the powerband more quickly than a Hellcat car without Torque Reserve.

When you couple that greater launch force with the traction advantages of the advanced all-wheel drive system, you get a 5,000lb (if not slightly more) SUV which will dash from 0-60 just as quickly as the Hellcat cars. More importantly, the Trackhawk is far easier to launch in a way that will get you to 60 in 3.5 seconds, whereas the Hellcat cars will take far more seat time – if not better-than-stock tires.

How the Trackhawk Works
In order to launch the 2018 Jeep Grand Cherokee Trackhawk to get to 60 in 3.5 seconds, you need to be in Track Mode, which engages the Launches Control feature with Torque Reserve. While sitting still, the launch sequence begins by pushing a button on the dash for Launch Control. At that point, you are promoted by the driver information screen in the dash to apply brake force, with a small gauge showing you how much brake force you need to add and with so much torque on hand – you need to apply a significant amount of brake force to keep the Trackhawk in place.

Next, with the brake pinned to the floor, you have to push the accelerator pedal all of the way down in less than a second, so it has to be a quick, decisive movement. At this point, you have both of the pedals pushed down as hard as possible, allowing the Torque Reserve system to engage. Boost builds instantly as the fuel flow and ignition systems create the wicked stutter effect from the supercharged engine, and you are ready to launch.

By letting off of the brake as quickly as possible, the Launch Control feature releases the brakes and the Trackhawk rips away from the starting line with 1.4 Gs of force. There is no need to play with the throttle on launch, as the various systems work to keep the wheels from spinning as little as possible while still maximizing power to the wheels. On my first run, I ran a 3.6-second dash to 60, which dropped to 3.5 on my next run and 3.4 on the run after that. Other writers testing the Trackhawk with me were also in the 3.5-3.6 range with ease, while several hit 3.4 and a few even hit 3.3 seconds. Again, that is from a 5,000lb, full size SUV with two adults inside and it really is as easy as it sounds.

Check out the videos below for a look at the Trackhawk launching from inside and from trackside.

LG's New EV Battery Plant Is a Welcome News for Tesla
Tesla Giga Berlin's New Hurdle: It's Not Only the Gov't, but Now Tesla Itself
END_OF_DOCUMENT_TOKEN_TO_BE_REPLACED