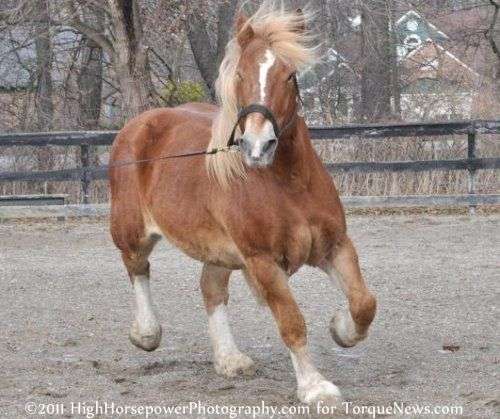 Horses pull a tractor trailer out of a snowy ditch

The internet is chock full of videos of animals dong whacky things but few compare to a recent video posted showing a team of four horses – 3 Belgian drafts and what looks to be a Clydesdale with some dirty feet – pulling a tractor trailer hooked to a large tanker-trailer out of a snowy ditch.
Advertisement

The recent snowstorms around the country have caused a great many accidents and even the largest vehicles are not immune to losing control in poor conditions. There isn’t any background on this video, but as the clip begins you can see that the tractor trailer is partially jackknifed with the front of the truck in a shallow roadside ditch. It looks as though the truck was coming from the right, trying to make a turn onto the road running towards the cameraman when the trucker slid into the ditch and the truck looks to be buried pretty badly. The influx of bad weather around the country has provided the towing industry with more work than they can handle and towing jobs like this one would require heavy-duty tow vehicles that are in even greater demand.

Enter what looks to be an Amish gentleman with a cart being pulled by 4 massive horses. Starting on the right, you have 3 Belgian drafts and on the very left side, the larger horse appears to be a Clydesdale with some dirty white feet or maybe a Shire. In any case, these are among the most powerful horses in the world (a team of two Belgian drafts currently holding the world record for pulling a 4,800+ pound sled - no wheels), so pulling a wheeled vehicle out of the snow is short work for these powerful horses that have been bred and trained to pull. I am the proud owner of a Belgian draft named Maximus (shown above) and to see these four drafts effortlessly pull the truck out of the ditch is no surprise to me…but it is nice to see that mother nature can sometimes help the combination of man and machine overcome the elements.

Keep in mind before watching the video that a traditional tow truck would most likely disconnect the trailer from the truck and even then, a job like pulling a tractor trailer rig out of the snow in poor conditions would take a heavy duty truck – if not more than one. However, the four draft horses in the video below with a guy driving them from a simple cart are able to literally rip the truck out of the ditch with the trailer still connected. Also, as the horses pull the truck away from the ditch, you may notice that the tires on the truck are not spinning – leading me to believe that there were no additional support provided by the engine of the truck – which is a great deal safer for everyone involved.

Oddly, after pulling what could be tens of thousands of pounds out of the ditch without any hesitation, you will notice that around the 19 second mark, what looks to be a field mouse jumps out of the snow between the feet of the horse on the right side of the video. As it dashes across the road in front of the horses, the second horse from the left spooks, causing the other horses to spook as well. Pulling a truck out of the ditch isn’t scary but a mouse that weighs less than their tail…that’s horrifying.

Check out the video below, showing some of the world’s most powerful horses assisting modern machinery in dealing with mother nature.