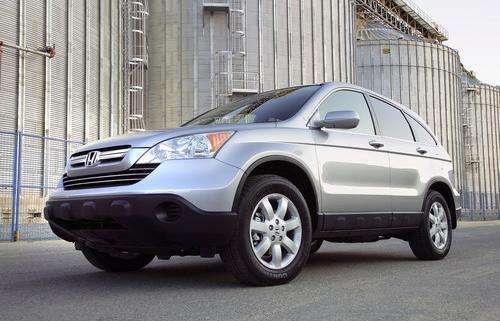 American Honda has issued a recall for select 2006 Honda CR-V compact SUVs over a concern that the passenger’s side front lower control arm could break – making it near impossible to control the vehicle is traveling at speed when this suspension component fails.
Advertisement

This new Honda CR-V recall is not yet appearing on the National Highway Traffic Safety Administration website so nothing is known beyond what was included in today’s announcement but what we do know is that select 2006 model year CR-V compact sport utility vehicles are being recalled for a faulty weld on the passenger’s side front lower control arm. Over time, this faulty weld could break and when it does – the right side lower control arm will not be able to do its job. This recall affects just 1,316 CR-V SUVs from the 2006 model year so when considering the fact that Honda was selling over 10,000 CR-Vs a month in 2006, there has to be some other determining factors that have not yet been revealed. This most likely pertains to a specific period of time when the affected models were built for such a small group of vehicles to be affected by the new CR-V recall.

For those unfamiliar with the workings of the front suspension components of the 2006 Honda CR-V, the lower control arm is a portion of the suspension that holds the mounting surface for the wheel and the front strut. When the weld on the passenger’s side control arm breaks, a variety of problems could come up including the tire moving freely of the steering rack and if the driver is traveling at high speed when this problem occurs – the sudden failure of the lower control arm could cause the passenger’s side front wheel to break free of the vehicle.

Luckily, no injuries or accidents have been reported as a result of the passenger’s side front lower control arm on the 2006 Honda CR-V breaking but with the inherent risk associated with this type of mechanical problem, there is a vastly increased chance of an accident in the event of a failure. Losing the ability to steer your CR-V at high speed could certainly pose a safety risk so before anyone gets hurt, Honda is going to get these 1,316 vehicles back to dealerships for repairs.

American Honda will begin notifying owners in the middle of April 2012, at which point owners will be asked to return to their local Honda dealership where the passenger’s side front lower control arm will be inspected and replaced, if needed. This service will be done free of charge to the owner but if the lower control arm needs to be replace, it could take a while so you may be leaving your CR-V at the dealership for the day.

For more information on whether or not your 2006 Honda CR-V is included in this recall, owners can call American Honda at 1-800-999-1009 and select option #4 along with stopping by www.recalls.honda.com. These two services will become available to CR-V owners starting in mid-April.

This is the third time that there has been a safety recall for the 2006 Honda CR-V, with the compact sport ute first being recalled in 2006 for an incorrect piece of information in the owner’s manual and again in 2011 for a far more serious risk involving the driver’s side window switch catching fire.