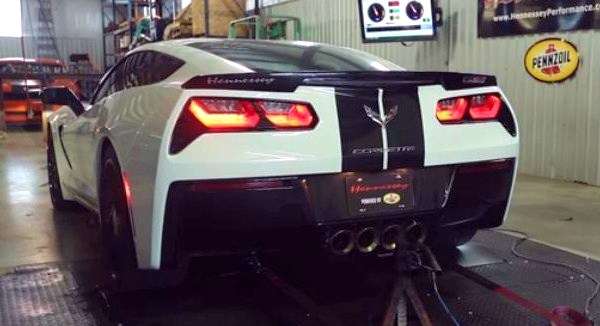 We have talked a ton about the high performance packages designed by Hennessey Performance for the C7 Chevrolet Corvette Stingray and today we have a dyno video of a new Vette fitted with the Texas tuner’s HPE700 package – putting down serious numbers and emitting a sound that is like music to my horsepower addicted ears.
Advertisement

We have learned quickly that the new LT1 V8 featured in the 2014 and 2015 Chevrolet Corvette Stingray offers impressive power in stock form, but adding performance goodies make a very big difference. This isnt all that big of a surprise, considering how well the entire LS engine series responded to modifications and with the introduction of the new LT engine series – GM has another V8 lineup that can make monster power when you begin adding the mod dollars.

The folks at Hennessey Performance have been busy (seemingly since the day that the C7 Corvette was introduced) putting together high performance packages for the new Stingray and the results have been nothing short of awesome. Hennessey has designed 7 packages that use a long list of different components to increase the power of the new Corvette from the standard 455 horsepower up to 1000 horsepower with a big set of turbochargers. The HPE700 package for the LT1 falls right in the middle of the Hennessey C7 Corvette range with a supercharged option and a twin turbo option. Today, we have a video of a new Stingray fitted up with the HPE700 supercharger package and in addition to making great power – this package sounds absolutely awesome across the entire powerband.

Details on the HPE700 C7 Chevrolet Corvette Stingray
As you might expect, the HPE700 supercharger package begins with a big top-mounted supercharger system that is similar in its design to what has been used on the LS9 engine from the C6 ZR1 and the LT4 engine in the new Z06. The HPE700 package then adds high flow cylinder heads, a custom grind camshaft, an HPE air intake kit and the engine calibration that allows these components to work together as efficient as possible. The result is – as the name suggests – 700 horsepower.

That 700 horsepower rating is at the engine, not at the wheels, so to show off how much power the Hennessey HPE700 supercharged Corvette Stingray puts to the ground the Texas tuning expert has loaded one of their built cars on the dyno for a display of awesomeness. Fortunately for all of us, Hennessey had the cameras rolling for this dyno blast so not only do we get to see how much power the blown HPE700 Corvette puts to the wheels, but we also get to hear how incredible this 700 horsepower beast sounds when it is being pushed to its limits.

For those who don’t care to wait for the dyno sheet, this Corvette Stingray makes 610.42 horsepower right around 6,500rpm and 557.33lb-ft of torque at 4,500rpm. The dyno graph also indicates that this supercharger Stingray makes around 450 lb-ft of wheel torque at roughly 2,400rpm. In other words, this system offers peak torque of a stock C7 Corvette pretty much as soon as you tough the gas.

Anyways, enough talk….crank up your speakers and enjoy the video of the HPE700 supercharged 2014 Chevrolet Corvette Stingray in action on the dyno. It is incredibly power but, more importantly for the sake of an awesome video, it is incredibly loud. It is music to my ears and you will almost surely feel the same way.