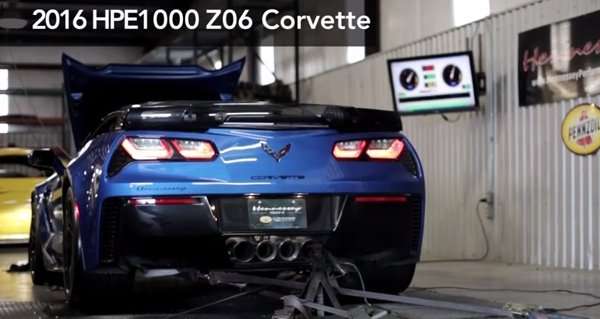 The Hennessey HPE1000 Corvette Z06 Screams on the Dyno

The folks at Hennessey have rolled out a video of their HPE1000 package for the C7 Chevrolet Corvette Z06 and while the output of more than 1,000 horsepower is impressive – the most exciting part of this video just might be the sound.
Advertisement

In the world of American high performance, there are few names as well-known than that of John Hennessey and when you think of Hennessey Performance vehicles, there is a good chance that a Corvette is the first thing to come to mind. While John and his crew offer extremely high performance packages for vehicles from Ford, Chrysler and even Nissan, they are arguably best known for their work in the area of General Motors tuning packages and from GM, few vehicles make a bigger splash than Hennessey-tuned Corvettes.

With this in mind, it should come as no surprised that Hennessey offers one of the most powerful performance packages for the C7 Chevrolet Corvette Z06 and today, we get a chance to listen to a new Corvette Z06 equipped with the Hennessey HPE1000 package as it works out on the dyno.

HPE1000 Corvette Z06
The Hennessey HPE1000 package for the Chevrolet Corvette Z06 builds on the LT4 engine that is standard from the factory, but Hennessey removes the standard LT4 top-mounted supercharger and replaces it with a new component piece mounted out in front of the engine. The engine itself is stroked to 416 cubic inches and fitted with the best engine parts that Hennessey has to offer, from the custom intake manifold to the high flow exhaust system.

As the name would suggest, this package lifts the output of the Corvette Z06 from 650 horsepower and 650lb-ft of torque to 1008 horsepower and 823lb-ft of torque. All of those figures are rated at the transmission, so to see what the HPE1000 Corvette Z06 makes at the wheels, the team strapped one to a dyno for a quick test. The result is an awesome 849.35 horsepower and 711.3lb-ft of torque at the rear wheels – enough to allow this Corvette to move out from 0-60 in just 2.5 seconds, while running the quarter mile in 9.7 seconds and hitting a top speed of more than 220 miles per hour.

Real world performance aside, this Hennessey dyno video gives us a chance to listen to the heavily built C7 Corvette Z06 engine screaming at wide open throttle and I think that most will agree – this is one of the best sounding supercars in the world.