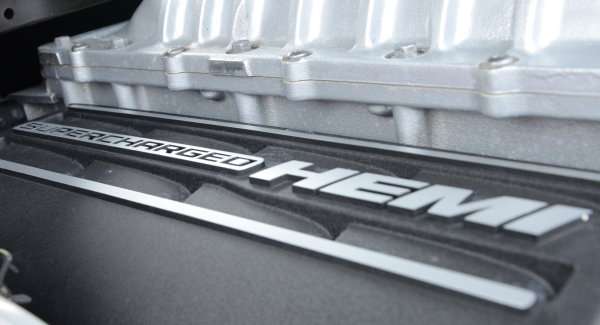 While there has been no official confirmation from the Chrysler Group, word around the automotive watercooler is that the Hellcat-powered Jeep Grand Cherokee Trackhawk could make its grand debut next week at the 2016 New York International Auto Show – presumably introducing the world to the most powerful production SUV ever.
Advertisement

Leading into the 2016 New York International Auto Show, here is what we know for sure about the possibility of a Jeep Grand Cherokee Trackhawk debut. On Wednesday, March 23rd at 3:20pm Eastern Standard Time, the Jeep brand will have a press conference at the New York Auto Show to reveal a new product. That is the entirety of the message, and there is no further hints as to what this new product reveal might bring us. However, the most popular rumor is that the new Jeep product revealed in New York will be the 707 horsepower, Hellcat-powered Grand Cherokee Trackhawk.

What else could this Jeep product reveal bring about? Well, it could be all sorts of things. It could be something as simple as a new trimline for the Cherokee or Renegade, or it could be a concept version of a future model. However, with the recent announcement that the Hellcat Jeep would definitely see production and little official information on any other future Jeep products – I am inclined to believe that the New York debut could be the long-awaited Trackhawk.

What to Expect
Based on the spy shots and videos showing what is believed to be the Jeep Grand Cherokee Trackhawk, it looks like the Hellcat-powered SUV won’t look all that different from the current SRT Jeep with the 392 cubic inch Hemi. It is expected that the Trackhawk will have a unique front fascia with increased airflow capacities, along with a hood that will help remove heat from the engine compartment.

The biggest news will, of course, be the supercharger 6.2L Hellcat Hemi under the hood, offering somewhere in the area of 700 horsepower and 650lb-ft of torque to all four wheels via a heavy duty 8-speed automatic transmission and an advanced all-wheel drive system. The Trackhawk will almost surely have an advanced adaptive suspension system and the similar gigantic Brembo brakes to those seen on the Hellcat Challenger and Charger.

On the inside, expect the Trackhawk to be loaded to the gills, with premium leather sport bucket seats, a high end infotainment system with the SRT gauge screen and timing system, and more than enough room for four adults while still having lots of room out back for cargo.

The one most interesting aspect is whether or not the Hellcat-powered Jeep will be equipped with a towing package. The SRT 392 Jeep tows very well, so the chassis of the Trackhawk should be able to handle a 5,000lb trailer without any issue, but will anyone tow with a 707hp SUV?

Again, this is all speculation, but we know that in less than a week, we could know everything that there is to know about the Jeep Grand Cherokee Trackhawk.