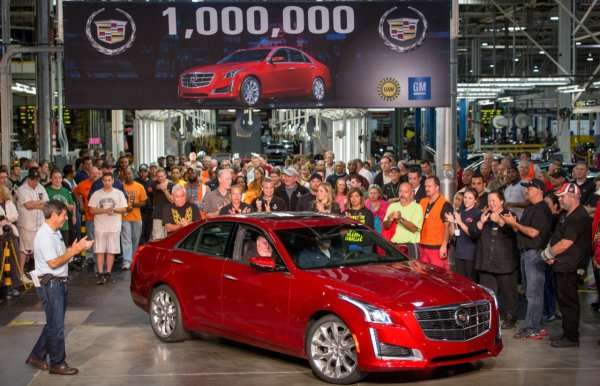 General Motors announced that on Monday, their Lansing Grand River plant in Michigan built its 1,000,000th Cadillac – most of which have been from the CTS lineup with the vast majority being the uber popular Cadillac CTS sedan.
Advertisement

The Lansing Grand River plant opened back in 2001 as a dedicated rear wheel drive assembly plant to build the then-new Cadillac CTS sedan and when the CTS Coupe and CTS Wagon were introduced in 2009 and 2010 as full production models – Lansing built those high end luxury coupes and sport wagons right alongside the CTS sedan. In the 12 years since the plant was christened, every single vehicle bearing the CTS nameplate has been built at this facility including the high performance V-Series models and when the new rear wheel drive ATS compact sedan was introduced for the 2013 model year, the Lansing plant was adapted to also build the smaller Cadillac sedan as well. Overall, with over 1,000,000 Cadillacs built since the opening of Lansing Grand River in 2001, this rear wheel drive facility has turned out an average of over 83,000 vehicles per year.

“One million Michigan-made Cadillacs is a great milestone for Lansing and for luxury car-building in America,” said Bob Ferguson, senior vice president Global Cadillac. “Lansing Grand River is an essential ingredient of Cadillac’s growth. It is a benchmark for luxury car manufacturing in North America, which takes another step forward today with the launch of the new CTS.”

The Lansing Grand River Assembly Plant covers 2.5 million square feet of the 11 acre piece of property on which the booming Cadillac plant resides. 1,541 employees work at LGR over two shifts to build new Cadillac rear drive models and with almost $300 million invested in the Lansing facility over the past three years to build both the 2014 CTS and the 2013 ATS, General Motors has made LGR one of their key North American assembly plants.

Starting sometime in 2015, Lansing Grand River will no longer just be building Cadillacs as General Motors announced late last year that the next generation Chevrolet Camaro will also be built at LGR. This announcement came with some controversy from the Canadian auto workers union as the Camaro has been built at the Oshawa Car Assembly Plant in Ontario since the 5th generation of the storied performance car was introduced for 2010.. This came as good news for those Americans looking for work in the Michigan area as the increased production rate will likely lead to more job creation for American workers but at the same time – it could mean some job losses in Canada. GM intends to increase production of other models in Canada but between adding new jobs in the US along with being able to boast that the Camaro is “Made in America” starting with the introduction of the 6th generation Chevy muscle car, the move to build the Camaro in Lansing should be a good move for the Detroit-based automaker on a variety of levels.

Even though the Chevrolet Camaro has been leading the muscle car segment for the past three years, the battle is heating up with the expected introduction of the next generation Ford Mustang sometime in 2014. Ford is able to brag that the Mustang is (and always has been) built in the USA but once the Camaro is built in Lansing – buyers who demand that their muscle car be made in the USA will have to choices.