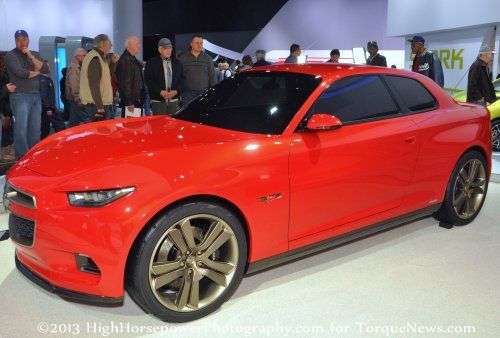 General Motors North American President Mark Reuss recently stated that his biggest wish for the Chevrolet brand was to offer an affordable, rear wheel drive sports car – one that would compete with the likes of the Mazda MX5 and the Subaru/Toyota joint venture coupes.
Advertisement

Chevrolet already holds the bragging rights of offering the two bestselling sports cars (in their respective class) in America with the Chevrolet Camaro leading the way for the more affordable class while the Chevrolet Corvette is the undisputed leader in the pricier sports car segment. That is an impressive claim but it isn’t enough for Reuss, who doesn’t enjoy the fact that GM is not competing in the rapidly growing rear wheel drive compact sports car segment. This smaller RWD sports car segment, which has been pretty much dominated by the Mazda Miata MX5 for the last few decades, has traditionally been labeled as a class for the older driver but the Scion FR-S and the Subaru BRZ have brought new life to the segment.

While speaking with the folks from Automotive News, Reuss said "A really nice, light, rear-drive car that's inexpensive -- we know that rings a bell. That'd be a huge win for us if we had that." His comment about it ringing a bell is likely referring to the fact that a lightweight rear wheel drive sports car from GM has been discussed thoroughly since GM introduced the Code 130R rear wheel drive Chevy coupe (shown above) at the 2012 Detroit Auto Show. That sporty compact was slightly larger than the Scion FR-S and Subaru BRZ, sporting a “distinctly Chevy” exterior design and a super efficient turbocharged hybrid drivetrain. Realistically, if GM wants to compete with the Mazda MX5 or the Scion FR-S/Subaru BRZ, they should think twice about including the heavy and expensive hybrid features in their production compact sporty coupe. Don’t get me wrong – I am not saying that a sporty hybrid wouldn’t be a popular niche vehicle – I just don’t think that a hybrid compact sports car would be able to really go head to head with the top models in that segment. Also, the added cost of the hybrid components would make it hard for GM to keep the new car in the mid to low $20,000 price range.

For comparison, the Mazda MX5 carries a starting price around $24k for the soft top model and $29k for the retractable hardtop package. The Scion FR-S starts just over $25k while the Subaru BRZ starts a touch over $26k. The compact rear wheel drive Chevy sports coupe would likely cost less than all of those models, as the company would likely want to avoid too much price overlap with the Chevrolet Camaro. The Camaro 1LS (base model) starts at $24,245 and some pricing overlap between the V6 Camaro and the turbocharged 4-cylinder compact RWD coupe may not be much of a concern because these two cars are marketed to very different buyers. The growing popularity of vehicles like the Scion FR-S and Subaru BRZ shows that buyers are more concerned with fuel economy, handing and a fun-to-drive attitude. While there are still plenty of American buyers who want the big power of the Camaro SS, the Ford Mustang GT and the Dodge Challenger R/T (and SRT8), cars like the MX5 and the Toyobaru twins are a total blast to drive while also being less expensive and more efficient. These cars are also more comfortable in a handling performance-based driving situation such as autocross or road racing than the base model Camaro so those GM faithful who want a car to drive to work or class every day while also being a monster between the cones on the weekends – the new Chevy rear drive compact coupe could be the answer.

One thing that may be preventing a production competitor from GM for the Scion, Mazda and Subaru compact rear wheel drive coupes is the relatively poor performance of GM’s last attempt in this segment. From 2006 through 2009, GM marketed the European Opel GT as the Saturn Sky and Pontiac Solstice here in the US. Offered just as a convertible, the Sky and Solstice were designed to compete directly with the Mazda MX5 but these twins never did as well as the company had expected. Between the lack of performance that lead to a fairly lackluster reputation in the racing community and the eventual demise of both Saturn and Pontiac, the Opel GT never really had a chance here in the US. The cars were a little too heavy and the power output was a little too low so not only were they not particularly great performance vehicles – they were also too expensive to compete with a price that averaged around the $30k mark. Unfortunately, being on Mark Reuss’ wish list doesn’t make the production version of the Code 130R Concept a certainty. Automotive News states that no such project is current in progress in the GM design studio so it could be a couple years before Reuss gets his wish but the Code 130R Concept is proof that the company has put at least a handful of planning into what could be the future compact rear wheel drive Chevy sports car.

Do you think that Chevrolet needs a rear wheel drive sports coupe that would sit below the Camaro in the company lineup? Tell us what you think in the comment section below!

LG's New EV Battery Plant Is a Welcome News for Tesla
Tesla Giga Berlin's New Hurdle: It's Not Only the Gov't, but Now Tesla Itself
END_OF_DOCUMENT_TOKEN_TO_BE_REPLACED