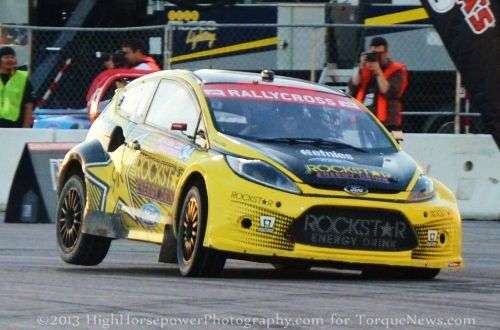 The Global RallyCross management team has just announced that the SCCA will be the global sanctioning body for the 2013 racing season – a decision which will help the GRC truly become a globally recognized racing league as the drivers head to locations around the world in 2013.
Advertisement

The schedule for the 2013 Global RallyCross Series has not been announced but we fully expect to see the GRC teams roaring around dirt-and-tarmac tracks in several countries in 2013 including stops in Brazil, Spain, Germany and the United States. The Sports Car Club of America (SCCA) Pro Racing division is a member of the Automobile Competition Committee for the United States (ACCUS) the National Sporting Authority for the Federation Internationale de l’Automobile (FIA) in the United States. Now that the GRC has secured sanctioning from the Sports Car Club of America Pro Racing division, the SCCA crew will assist the Global RallyCross drivers in licensing for international events under FIA rules.

“This is a logical partnership given both GRC’s and SCCA’s interest in the growing sport of rallycross on both professional and amateur levels, and we’re excited about the potential this has for our members,” SCCA, Inc. President and CEO Jeff Dahnert said.

Finally, the SCCA Pro Racing body will also list the 2013 Global RallyCross events on the FIA International Calendar which will hopefully mean that the 2013 GRC schedule will be announced soon. It has been questioned why the GRC management has been waiting so long to announce the nine stops for the new season and that delay could have been caused by the dealings behind the SCCA sanctioning agreement.

“SCCA Pro Racing is very pleased to work with Global Rallycross on this exciting project,” SCCA Pro Racing President CEO Tom Campbell said. “We will be able to provide them with excellent sanction and support services, and assist in the growth of the series and the rallycross sport in the U.S. and internationally.”

2012 was a great year for the Global RallyCross Series with six races run around the country with television broadcasts on ESPN along with online broadcasts via ESPN3 for Xbox360 users. This broadcast schedule between the two ESPN networks offered viewers around the country more access to watch the GRC than ever before. While the coverage may have been a bit abbreviated on ESPN and a bit jenky on ESPN3, Global RallyCross fans like myself had a chance to see almost every second of racing action in 2013 without making trips to the various racing venues.

On top of the expanded broadcast coverage for 2012, the fact that the Global RallyCross Series ran alongside popular NASCAR series’ brought record crowds for the GRC. While interest in the long popular NASCAR series’ has faded among younger viewers due to a variety of reasons including the lack of parody and the extreme length of the races. However, the relatively short GRC races are more appealing to younger viewers while the personal nature of the series combined with the high profile personalities in the sport have helped to further attract the younger race fans. Drivers like Ken Block and Tanner Foust (shown above on the right) entered into the GRC series with a huge fan following while racers like Brian Deegan, Travis Pastrana, Dave Mirra and Bucky Lasek has brought with them a great many fans from the non-racing world of extreme sports. Add to those globally known names some of the top rated rally racers from around the world including Rhys Millen, Marcus Gronholm, Liam Doran, David Higgins and Sebastian Loeb and you have a field of the most experienced – and most exciting - rally racers in the world jammed into one tight, intricate race track.

There is also the simple fact that the Global RallyCross races are action packed with tons of car-to-car contact and high flying antics that make the GRC well deserving of the title of an “action sport”. In NASCAR, contact is allowed so long as the car that comes out on the winning end of the contact is one of NASCAR’s sweethearts. In GRC, contact is contact whether it occurs between the top two ranked drivers, the lowest ranked drivers or a combination of the two where in NASCAR – taking out one of the series’ moneymakers like Jimmie Johnson or Dale Earnhardt Jr will result in a crushing penalty to an unknown driver. The fact that literally every driver in a GRC field has a real chance of winning the high flying, action packed races is a major part of why so many fans are tuning in to see these 600 horsepower compact cars battle their way to the finish line.

As a major fan of the Global RallyCross Series, I will be covering the 2013 GRC season from beginning to end so those of you who are interested in the GRC can expect to find all of the most important information including race coverage throughout the 2013 season.