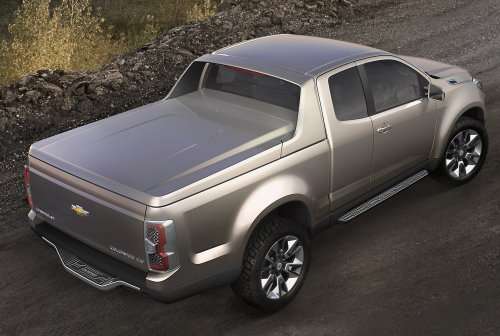 General Motors has offered up a full complement of images and details about the next generation Chevrolet Colorado but Chevy truck lovers in the US as this new midsized pickup doesn’t seem to be destined for the US market.
Advertisement

The next generation Chevrolet Colorado will make its grand debut at the upcoming Bangkok International Auto Show but today, The General offered up a spread of new images of the upcoming pickup as well as some basic drivetrain information. GM points out that this vehicle is the Chevrolet Colorado “Show Truck”, with GM's global vehicle line executive Brad Merkel offering this bit of insight:
“Although this is a show vehicle, the basic proportions and form convey the vision for the next-generation Colorado that we will bring to market. It reflects a stylized version of the new truck, one that takes into account rugged dependable truck capabilities for commercial use as well as sophisticated refinement for personal-use needs.”

This would lead me to believe that the new Chevrolet Colorado hitting the Thailand market late this year will likely look a great deal like this show vehicle with the exception of some items that might be available but aren’t likely to be standard. Items like the wild 20” wheels, LED taillights/projection headlights, and the elaborate body colored tonneau cover are all nice additions to this show vehicle but when the next generation Colorado hits dealerships around Thailand later this year – I would expect to see some more traditional wheels/tires as well as the lights in the front and back. The tonneau cover looks super clean but this is another item that would be unusual to see in standard form. The distinct styling cues across the front end display a headlight/grille/hood area that gives the new Colorado the look of something like a modern Chevy SUV applied to the shape of a smaller pickup.

Inside, the new Chevrolet Colorado offers a very high-tech looking layout, with digital readouts for the driver and passenger side HVAC controls with a large touch screen above them. The steering wheel offers a variety of controls for the infotainment system and behind it, we see a very production-ready looking gauge cluster. The interior layout offers front buckets with what looks to be room for a rear seating area (albeit a very small one) but with the lack of seat belts, it looks like the new Colorado Show Truck is only meant to offer seating for two. However, the extended cab configuration looks to add quite a bit of space behind the front seats for cargo and it looks like an “emergency seat” would easily fit into a production vehicle.

The drivetrain details are very limited but we know that the new Chevrolet Colorado Show Truck is powered by a 2.8L turbo diesel that will offer plenty of torque for towing and hauling with solid fuel economy numbers. Unfortunately, with diesel smaller vehicles (not full sized trucks) getting very little attention from the American consumer market, any production version of this vehicle to hit US shores would likely offer more common engines to the American Chevrolet lineup. It should also be pointed out that GM has made no mention of plans to bring this truck to the US and the Shreveport Assembly Plant builds the current Chevy Colorado and GMC Canyon but that plant is planned to close in 2012 – so the American history of the GM compact pickup is up in the air.

Check out the gallery below for a closer look at the new Chevrolet Colorado Show Truck that will meet the world at the 2011 Bangkok International Auto Show.