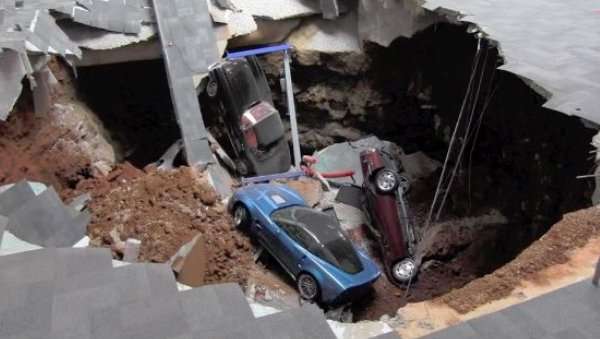 Roughly 16 months ago, a sinkhole under the floor of the National Corvette Museum Skydome exhibit opened up and swallowed eight Corvette show cars, but the fully restored display area will reopen next month in the same form as before the Earth tried to claim those special American sports cars.
Advertisement

According to Louisville’s WDRB, the finishing touches are being performed on the newly completed Skydome exhibit in the National Corvette Museum. The gigantic sinkhole has been properly reinforced and filled in, the structure has been checked, rechecked and reinforced and the flooring of the Skydome has been repaired so that there is no sign left of the massive hole that opened up back in February 2014. WDRB didn’t state an exact date for the grand reopening of the Skydome exhibit, but based on this report, it should come sometime in July.

That Fateful Day
Early in the morning of February 12th, 2014, video cameras inside of the Skydome exhibit of the National Corvette Museum watch as the floor collapsed, slowing pulling eight classic and historically significant Chevrolet Corvette models into what turned out to be a very, very large hole in the Earth. When the smoke had cleared and cleanup crews got in to get a look at just how bad things were, we saw that only a few of those 8 Corvettes were visible while the rest were buried in the rubble.

Unfortunately, as the rescue team unearthed the other Corvettes, some of them were so badly destroyed that there was simply no repairing them. A private owner donated a 40th anniversary car to replace the damaged one, which will remain in the sinkhole exhibit at the museum alongside the other cars which were too badly damaged to fix. The cars which will be fully restored are the 1962 Corvette, the 2009 Blue Devil and the 1 millionth Corvette, which the rest will remain in their pulverized state as a flashback to that sad day in American automobile history.

Click here for a look at the right Corvettes swallowed by the sinkhole before they were destroyed.