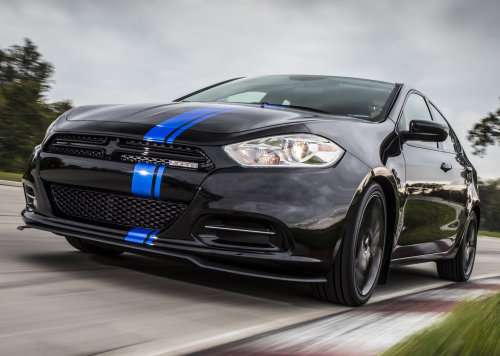 Full details on the Mopar 13 Dodge Dart - with pictures

While the first details of the Mopar 13 Dodge Dart were leaked via the Dodge of Canada website, the Chrysler Group issued a full statement on the limited edition Dodge Dart with complete information on the sporty compact sedan headed to Chicago.
Advertisement

While the information posted on the Dodge of Canada website offered us a very good idea of what to expect from the Mopar 13 package, today’s announcement details the package and clears up some of the questions created by the “leaked” information earlier this week.

First of all, the main piece of key information on the Mopar 13 Dart that does not match up with the Canadian website is that this limited edition sport sedan will be fitted with the 1.4L MultiAir turbocharged motor mated to a proper 6-speed manual transmission. The early info from the Canadian site suggested that the Mopar 13 would be available with either the 1.4L turbo motor or the base 2.0L option while also coming with either an automatic or manual transmission. I applaud their decision to stick with the turbo motor and the clutch pedal. This configuration will shuttle 160 horsepower and 184lb-ft of torque to the front wheels in stock form but the Mopar 13 features a performance exhaust system but – sadly – there has been no quoted power increase from the exhaust. Further improving the performance capabilities of the Mopar 13 is a sport suspension package that lowers the car by almost an inch while also helping the Dart handle the roads better while a premium brake kit with cross drilled and slotted rotors help the Mopar 13 stop on a dime. Finally, the gloss black 18” aluminum wheels are wrapped in low profile performance tires to aid in acceleration and handling – while also giving the car a more aggressive stance.

On the outside, the Mopar 13 package adds a Mopar ground effects kit that adds a front chin spoiler, a one piece low profile decklid spoiler and a unique rear diffuser. While the decklid spoiler is fairly subtle, the front chin spoiler and rear diffuser so a long way in making the Dart even sportier than it is in stock form. The entire body of the Dodge Dart is then finished in gloss black including the 18” wheels, the crosshair grille, the upper and lower grille filler, the mirrors and the door handles while the chrome Mopar badging on the grille and on the trunk lid join the standard chrome Dodge, Dart and MultiAir Turbo badging found on all similarly equipped Darts. The exterior is finished off with a Mopar Blue stripe kit that starts on the front fascia, runs over the hood, roof, trunk lid and rear end with a dual “driver stripe” design that has been featured on the previous Mopar branded vehicles.

Inside, the Mopar 13 Dodge Dart wears a striking interior design that centers around the bright Mopar Blue leather driver’s seat. The rest of the seating positions feature black leather with Mopar Blue trim and that black-and-blue leather pattern is echoed in the steering wheel, on the shift know and on the dash cap while the interior as a whole features lots of black chrome and gloss black trim. The Mopar 13 package also includes the 7” TFT driver information cluster, the 8.4” infotainment touchscreen, a wireless charging system, Mopar sport pedals, Mopar floor mats, Mopar door sill guards and a serialized dash plaque that signifies the limited nature of this special Dodge Dart.
Finally, the buyers of the 500 Mopar 13 Dodge Dart sedans will each get a personalized owners kit which includes a personalized plaque with the vehicle specs, the build date, the vehicle number out of 500, a Mopar 13 brochure and a limited edition sketch of the Mopar 13 signed by Mopar Chief Designer Mark Trostle.

The Mopar 13 Dodge Dart will make its grand debut next week at the 2013 Chicago Auto Show while production of the 500 special edition sedans will begin this spring at the Belvidere Assembly Plant in Illinois. The company has not announced the pricing for the Mopar 13 but this special edition package is expected to arrive on Dodge.com tomorrow – at which time we might get the pricing of this slick looking Dodge Dart.

Chrysler did not offer any images of the interior of the Mopar 13 Dodge Dart but with the public debut next week – we should soon have an even better look at this great looking, limited edition sport sedan. In the meantime, check out the gallery of the new Mopar 13 on the right by clicking any of the thumbnails.