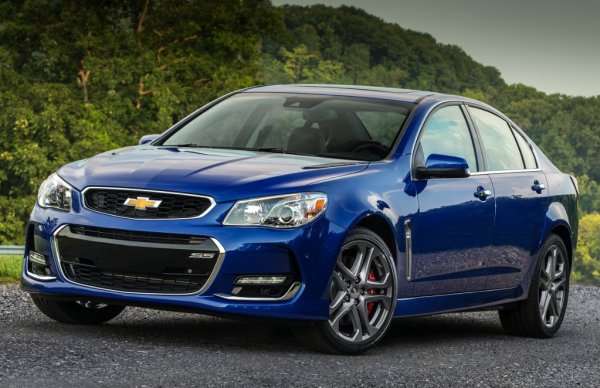 Four Door Corvette Gets a Facelift for 2016

The Chevrolet SS – the car billed by General Motors as a four door Corvette – has gotten some minor changes for the 2016 model year, although basic performance features and figured will all remain the same for the new year.
Advertisement

While the Chevrolet SS has become terribly overshadowed by the C7 Corvette and the arrival of the 2016 Camaro, General Motors hasn’t completely forgotten about the car once referred to as the four door Corvette in a company release. Unfortunately, there are no real performance increases for the 2016 model year Chevy SS sport sedan, but GM has given the big brawler a facelift for the new model year.

2016 Chevrolet SS Facelift
The biggest change to the 2016 Chevrolet SS sedan comes up front, where a new fascia gives the car a more aggressive countenance while also improving aerodynamics. Overall, the shape is the same as the 2015 model year, but the areas where the driving lights are mounted have been shuffled around and re-sculpted. In addition to looking a bit sharper, the new outer edge is designed to better channel air over the front wheel openings, improving high speed aerodynamics. There are also new functional vents added to the hood and a new set of 19 inch aluminum wheels working with the fresh front end to make the 2016 SS more aggressive than the 2015 models.

New Exhaust, Same Engine
While the rest of the Chevrolet vehicles with a V8 engine have moved onto the new LT engine architecture, the 2016 Chevrolet SS is still powered by the LS3 V8 from the C6 Corvette and the 2015 Camaro, packing 415 horsepower and 415lb-ft of torque. While these figures were impressive when the SS was introduced, having “just” 415 horsepower puts the Chevy as a massive disadvantage compared to the other high performance large sedans sold in the US.

The Chevy SS does still come with the high performance magnetic suspension setup from the 6th gen Camaro SS and the C7 Corvette lineup as well as Brembo brakes and the buyer’s choice of a 6-speed manual or automatic transmission.

The only drivetrain change for the 2016 model year Chevy SS is a new dual mode exhaust system, promising less sound at lower speed and an even louder tone at wide open throttle.

So, while the 2016 Chevrolet SS sport sedan might not be any faster, there is no question that the new front end presents a more aggressive look and the promise of a louder exhaust system can only be a good thing. I don’t expect these changes to make a big difference for SS sales, but the 2016 model year changes should help keep the SS relatively fresh until the car meets its demise in the coming years.

Elon Makes a Cybertruck Statement With an Action, But Quiet in Words
Tesla's Record Month in China: Doubled Registrations in March 2021
END_OF_DOCUMENT_TOKEN_TO_BE_REPLACED