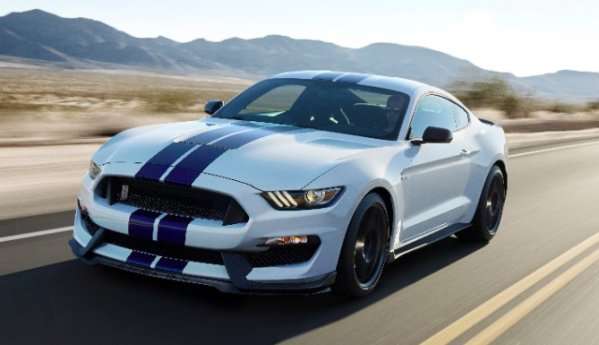 Ford Shelby GT350 Mustang #1 to be Auctioned for Charity

If you want to take a shot at buying the very first new Ford Shelby GT350 Mustang, you will be able to do so at the upcoming Barrett Jackson Scottsdale Auction, but with the proceeds of the auction benefitting the Juvenile Diabetes Research Foundation – we can expect to see this track ready pony go for very big money.
Advertisement

Whenever a hot performance car like the new Ford Shelby GT350 Mustang arrives, it has become so common for the first production example to head to a charity auction that the news of the new GT350 being auctioned off doesn’t come as much of a surprise. Really, had I been asked to bet on whether or not the first copy of the newest Shelby Mustang would be auctioned off for charity, my safe money would have been on “yes” – and I would have been right as Ford Motor Company has made it official that Shelby GT350 Mustang #1 will be auctioned off next month at the Barrett Jackson Scottsdale Auction with the proceeds going to benefit Juvenile diabetes research.

“The all-new Shelby GT350 is a thrilling, world-class car,” said Steve Ling, North America car marketing manager for Ford. “From the all-new independent suspension – a first for a Shelby, to the powerful engine and superb brakes, this car is simply amazing. Just as the Shelby GT350 did in 1965, we expect this new-generation pony car to demonstrate Ford Motor Company continues to lead the world in innovation and performance.”

The GT350 Should Raise Big Money for Charity
Over the past few years, high profile performance car auctions like the new Ford Shelby GT350 Mustang have helped automakers and the Barrett Jackson auto auction folks raise millions upon millions of dollars for various charity efforts around the USA. Lately, the biggest charity auto auction news reports have focused on the string of new Corvettes which have each brought in right around a million dollars each, thanks to the generosity of NASCAR team owner Rick Hendrick. Hendrick also paid $825,000 for the very first Dodge Challenger SRT Hellcat, which was then matched by another group and with a total of $1.65 million contributed to charity, the Hellcat Challenger raised more money than any other single auction car ever. Also, while it didn’t bring in the big money of the higher powered Chevy or Dodge performance cars, the very first 2015 Ford Mustang GT also brought in some serious coin for charity, raising $300,000 at last year’s Barrett Jackson Scottsdale auction.

“Ford and Barrett-Jackson have raised millions of dollars to benefit local and national charities for many years,” said Craig Jackson, chairman and CEO of Barrett-Jackson Auctions. “The auction of the new Shelby GT350 promises to be electrifying, while helping raise necessary funding for JDRF.”

Based on what we have seen in terms of money paid for these high profile “first unit” performance cars, the new Ford Shelby GT350 Mustang should definitely bring in some major money when it hits the block next month. Considering that the “normal” 2015 Mustang GT raised $300,000, the right to own the first new GT350 should raise close to a half million dollars and if a bidding war breaks out – there is a chance that the newest Shelby Mustang could bring in comparable money to the Corvettes and Challenger Hellcat sold by Barrett Jackson in the past couple years.

Proceeds Benefit Juvenile Diabetes Research
As was the case with the auction for the first 2015 Ford Mustang GT, the proceeds of the first Shelby GT350 auction will go to JDRF. JDRF was formerly known as the Juvenile Diabetes Research Foundation and while the group’s name has changed – their goal of helping to fund breakthroughs in diabetes prevention and treatment has not. Ford was able to hand the JDRF a check for $300,000 after the 2015 Mustang GT rolled off of the block in Scottsdale and, like me, Ford has to be expecting the new Shelby GT350 to bring much bigger money to the JDRF charity.

“JDRF is privileged to work with Ford, and we are extremely grateful for the generous support from Ford and its employees through the years,” said John Brady, JDRF chairman, international board of directors. “We are honored to be part of the company’s 50-year celebration of the Shelby GT350 at Barrett-Jackson Scottsdale. This very exciting and worthwhile event means a great deal to not only JDRF and the type 1 community, but to me personally as well. We are dedicated to continue our work and to share our vision of creating a world without type 1 diabetes.”

The first Ford Shelby GT350 Mustang (Barrett Jackson lot #3008) is set to hit the block on Saturday, January 17th, so if you have a big enough bank account to hand over upwards of a half million dollars for a new pony car, you can start planning your trip to Arizona in mid-January right now. Those of you who don’t have that kind of money laying around can catch all of the bidder action as the auction airs live in Velocity.

Tesla Contemplates A New Strategy for China Retail even As Sales Boom
Jay Leno on Elon Musk & EVs: “I Think He Should Get ... Credit"
END_OF_DOCUMENT_TOKEN_TO_BE_REPLACED