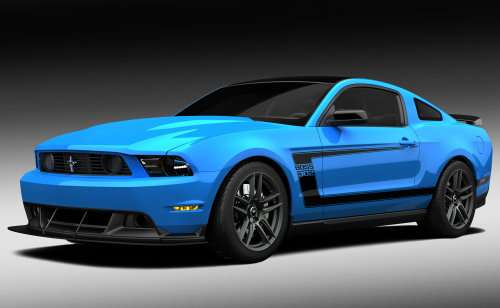 Ford and Barrett Jackson Auto Auction (BJAA) have worked together on other projects and like the previous auctions, the Grabber Blue 2012 Boss 302 Laguna Seca will be auctioned off with the proceeds going to charity. In this case, the proceeds of the auction for the Grabber Blue Boss 302 Laguna Seca edition Mustang will go to help the Juvenile Diabetes Research Foundation.

While the new Boss 302 Laguna Seca model is labeled as a 2012 model year vehicle, it was introduced in 2010 – 40 years after road racing legend Parnelli Jones piloted the original Boss 302 to victory at the 1970 Trans Am series opener, which happened to be run at the Laguna Seca raceway from which this special edition Mustang derives part of its name. 2011 marks the 40th anniversary of the Barrett Jackson Auto Auction in Scottsdale Arizona so to help the company celebrate, Ford has offered up this 1-of-1 Grabber Blue Laguna Seca edition 2012 Boss Mustang.

While the Mustang being auctioned off on January 22nd in Scottsdale is mechanically identical to the limited production run of the 2012 Mustang Boss 302 Laguna Seca, with an advanced suspension system and a 444hp 5.0L V8 under the hood, the Grabber Blue paint scheme with black stripes is a combination that Ford’s President of The Americas Mark Fields states that this will only ever be offered on this one car. This means that not only will the winning bidder be helping a children’s charity while also buying the best handling Ford Mustang ever, but he or she will also be investing in a piece of Ford’s history.

The standard issue 2012 Boss 302 Laguna Seca Mustangs are available in either black or silver with red trim so this could be a Mustang enthusiasts only chance to get a Laguna Seca edition in a different color and this special edition Grabber Blue Boss includes blue highlights inside of the car, where the traditional units come with red trim on the seats and rear x-brace.

The auction will include commentary from Parnelli Jones with company president Mark Fields and Mustang Chief Engineer Dave Pericak. Over the past four years, Ford’s cooperation with BJAA has allowed the pair to raise over $2.5 million for charities around the US.

Check out the gallery below and stay tuned to TorqueNews.com for all of your automotive news, including more on the auction of this special edition 2012 Mustang Boss 302 Laguna Seca.

LG's New EV Battery Plant Is a Welcome News for Tesla
Tesla Giga Berlin's New Hurdle: It's Not Only the Gov't, but Now Tesla Itself
END_OF_DOCUMENT_TOKEN_TO_BE_REPLACED