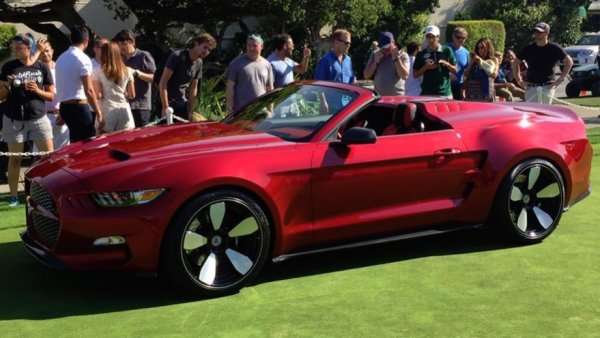 This past weekend at the Pebble Beach Concours event, the drop-top version of Henrik Fisker’s Ford Mustang Rocket debuted, with this new Rocket Speedster adding a unique aero panel behind the front seats, but doing so without losing the functionality of the roof or the rear seats.
Advertisement

If you are somehow unfamiliar with the Ford Mustang Rocket, it is a customized version of the newest Mustang with the design work performed by Henrik Fisker and the builds done by the folks at Galpin Auto Sports. The Rocket package adds a long list of unique appointments inside and out, along with the option for a 725 horsepower engine rating with a special supercharger package and since debuting at the 2014 LA Auto Show, the unique front end has drawn a ton of interest – both positive and negative.

When I first saw the Rocket, I didn’t care for the massive grille, but after seeing the customized Mustang in different colors, I have some to appreciate Fisker’s Rocket – even if strictly for the uniqueness in a market where there is often more of the same. The Mustang Rocket fastback starts at $110,000 in naturally aspirated form while the 725hp supercharged version starts at $150,000. So far, Galpin has built and sold 3 of the Rocket Mustang coupes with another 13 more on order, but this past weekend at the Pebble Beach Concours d'Elegance, the Rocket Mustang Speedster made its grand debut among many of the greatest cars in the world.

The Mustang Rocket Speedster
The Ford Mustang Rocket Speedster shares the vast majority of the styling features of the Rocket fastback, with the key difference being the tonneau that extends from the rear deck lid, forward over the rear seats and up to the back of the front seats. Thanks to the long nose of the 2015 Mustang – which is accentuated with the Rocket front end – the long rear area behind the driver’s seat works, giving the car a surprisingly balanced look as a 2-seater. The tonneau includes vents to let the air passing through the cockpit exit while the bulging design where it meets the seats gives this custom Mustang a very high end, exotic look.

Really, while the Rocket grille might draw some criticism, the total package of the Rocket Speedster Mustang looks pretty great from every angle.

Best of all, in designing the Rocket Speedster, Fisker and Galpin were able to preserve the functionality of the rear seats and the factory cloth top. When you remove the Rocket Speedster tonneau, the back seats are still there and the factory top is still fully operational, so this is a car that you can drive in all weather – you just need to do some planning to figure out whether or not to leave the huge tonneau at home.

There is no pricing information on the Ford Mustang Rocket Speedster and right now, it is still technically a concept, but reports indicate that the topless Fisker Mustang shouldn’t be much more expensive than the fastback.