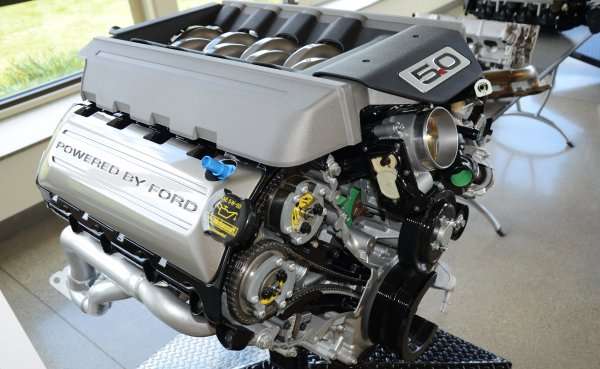 Ford has announced the first official power figures for the entire 2015 Mustang lineup and while the numbers are a touch lower than rumors had suggested, the numbers are still sure to make the S550 Mustang an awesome performance model – from bottom to top.
Advertisement

Well, Ford announced their first official power numbers yesterday for the entire 2015 Mustang lineup and while the numbers are very strong, they are a touch lower than many expected. It should be noted that these are not yet SAE certified and these numbers could change before the 2015 Mustang reaches dealerships.

Official Power Figures for the 2015 Mustang
The 2015 Ford Mustang base model with the 3.7L V6 will offer 300 horsepower and 280lb-ft of torque. That is actually a drop from the 2014 V6 Mustang of 5 horsepower. Considering the slow shift away from this aging V6 engine, it doesn’t come as a huge surprise that there has been a slight reduction in power.

The 2015 Ford Mustang EcoBoost was promised to have at least 300 horsepower and 300lb-ft of torque, and both of those numbers have been exceeded in the first official power figures. Ford has listed the EcoBoost as packing 310 horsepower and 320lb-ft of torque when running on premium 93 octane gasoline. That is a touch lower than some of the rumored numbers, but that is still a significant advantage over the base V6 and it should hit those numbers while also offering incredible fuel economy.

The Final Power Figures Could Be Higher
One key aspect that many outlets have failed to take note of is that these official power figures for the 2015 Ford Mustang EcoBoost and Mustang GT are not yet SAE certified. The output of the 3.7L V6 is official under SAE standards, but neither the 2.3L EcoBoost nor the 5.0L V8 numbers are certified thus far. Ford engineers have alluded to the fact that the 2.3L EcoBoost could actually be a bit higher, but they definitely will not be lower. As for the 5.0L V8, the numbers of 435 horsepower and 400lb-ft of torque are expected by the folks at Ford to be pretty much dead on…but there is potential for slightly higher numbers from the Mustang GT engine as well.

SAE certification will be completed for all of the 2015 Ford Mustang engines within the next month or so, at which point we will finally learn what official power numbers will be used for marketing purposes of the next generation Mustang.