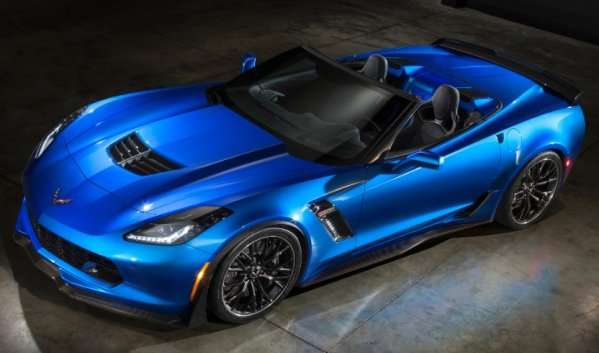 First 2015 Corvette Z06 to be Auctioned for Charity, Presumably to Rick Hendrick

The first 2015 Chevrolet Corvette Z06 Convertible will head to the Barrett Jackson Scottsdale event in January with the proceeds set to benefit the United Way of Michigan and based on the results of the past three C7 Corvette charity auctions, we have to expect that Mr. Rick Hendrick will be looking to put down at least a million dollars for Z06 droptop #1.
Advertisement

Since the 7th generation of the Chevrolet Corvette was introduced with the stunning new 2014 Stingray, every new version of the vehicle has been sent to a Barrett Jackson auction so it should come to no surprise that when the very first 2015 Corvette Z06 Convertible rolls off of the assembly line, it will also be destined for a buyer who paid big bucks at auction – presumably NASCAR owner and now-legendary car collection Rick Hendrick.

The Rick Hendrick C7 First Car Collection
If you follow the American performance car world at all, the name Rick Hendrick should be very familiar as not only is he a championship-winning NASCAR team owner, but he has also become one of the biggest names in the world of collector car auctions. In the past, Mr. Hendrick has purchased cars including the first modern (2010) Chevrolet Camaro, the first ever Chevy Volt, the first 2015 Dodge Challenger SRT Hellcat and – of course – the first three C7 Corvettes mentioned above. The 2015 Z06 Convertible is the fourth model in the new C7 line and with Rick Hendrick owning the first production unit from the first three, it would be mind-blowing to see him not complete his set with the addition of the 2015 Corvette Z06 Convertible.

Say that some other wealthy car collector showed up in January at the Barrett Jackson Scottsdale auction with the hope of breaking up Rick Hendrick’s set of C7 Corvette first units. If someone with similar deep pockets to Hendrick shows up looking to play spoiler, Hendrick could be forced to spend even more money on Z06 #1 so even if the price is only slightly higher – it will be interesting to see what happens if Hendrick has some real competition in the bidding war.

Unfortunately, the Barrett Jackson Scottsdale auction doesn’t run until January 10th through the 18th so we will be waiting a while to find out if Rick Hendrick can complete his set.