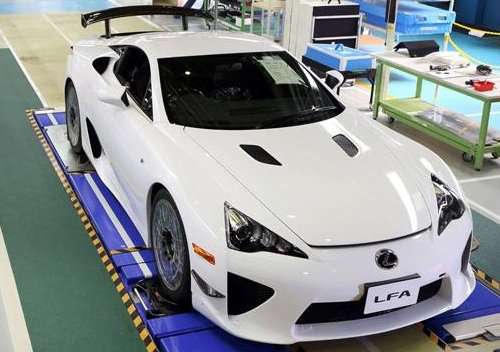 The final Lexus LFA rolls off of the company production line

Toyota Motor Co has announced that the very last Lexus LFA slated for production has rolled off of the company production line at the Motomachi Plant in the Aichi Prefecture – with the last LFA ever built finished in bright white and fitted with the high performance Nürburgring package.
Advertisement

When Lexus began producing their groundbreaking LFA supercar on December 15th 2010, the luxury brand promised that just 500 examples of the lightweight V10 sports car would be built. Unfortunately, the company stayed true to that and after the 170 specially chosen workers spent two years hand crafting the 500 Japanese supercars – production has officially ended with the crew building 500 cars in 729 days. The 170 supercar builders who were chosen to manufacture, assemble and paint the Lexus LFA did so at a rate that brought about one new LFA each day that the team was hard at work.

While there has been no word from Lexus as to the arrival of a new supercar in the luxury lineup, the company is quick to point out how the LFA has had a lasting impact on the existing lineup – most notably in the form of the expanded number of vehicles available with the F Sport package. The company also stresses the fact that the information gathered while working on the LFA project has also gone into building better cars across the entire lineup and not just among those sporty “F” models. Next, the heavy use of carbon fiber reinforced plastics (CFRP) in the development and production of the Lexus LFA is an experience that the company plans to use on future models. This could begin with producing lightweight components for the standard production models but it could eventually lead to another high performance Lexus sports car.

“I've lived and breathed supercars for the past decade,” said Haruhiko Tanahashi, Lexus Chief Engineer of the LFA project. “Specifically one supercar - the LFA. Very few people have the opportunity we had: to create a world-class supercar from a blank sheet of paper.”

The Lexus LFA supercar worked to redefine how people looked at how many people perceived the Lexus brand that began purely as a premium luxury line. There was a time when most people looked at Lexus as a luxury brand for the older, more conservative driver but the LFA showed that Lexus was capable of far greater things. Over the years following the introducing of the LFA, we have seen a lineup of cars and SUVs that did not stray from their luxury roots but they maintained that premium feel while integrating a new, edgy exterior design and an all new sporty spirit.

The Lexus LFA is out of production but its spirit lives on in the modern sporty lineup that has spread from the entry level IS all the way up to the flagship LS sedans – plus the Lexus sport utility models that have also benefitted from the Japanese luxury brand’s shift towards a far edgier exterior design.

The most significant milestone for the Lexus LFA came at the Nürburgring – where the company’s high performance Nürburgring package flexed it muscles as it ran a blistering fast 7:14.63 around the famed race course. That ranks the LFA second in terms of the fastest laps around the Nürburgring Nordschleife, behind only the Dodge Viper SRT10 ACR which turned a record time for a production, street legal car of 7:12.13. Considering how close the LFA was to catching the Viper - trailing by exactly a second and a half – we wouldn’t be surprised to see the company arrive at “The Ring” for another shot at the Viper even though the supercar has seen the end of its production run.