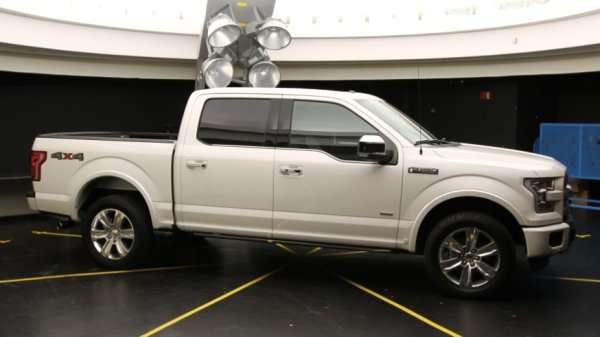 Even the Paint, Plastic and Chrome of the 2015 Ford F150 is Tougher

Ford Motor Company wanted to make the new 2015 F150 better than ever in every possible way so in addition to the new lightweight, rustproof aluminum body and a lineup of engines that offers a great mix of power and efficiency – the exterior components of the next generation F150 have been subjected intense sunlight exposure to ensure that they do fade during prolonged exposure to the sun.
Advertisement

While we might spend a whole lot of time talking about the lightweight body of the 2015 Ford F150 and the range of engines that are both powerful and efficient, the fact of the matter is that many people who buy the 2015 F150 will do so because they like how it looks. Having a truck that will tow 11,000lbs with over 400lb-ft of torque is great, but there are plenty of people who will never tow anything and they will never need all of that power. This is why there is a base model V6 and for those people, how the new F150 looks inside and out is more important than being the most powerful or the most capable in the class.

Along those same lines, the people who buy a new 2015 Ford F150 because they love the Super Duty-like exterior design aren’t as concerned that their new truck can run the Baja 1000 as much as they are concerned that their truck will still look great years down the road. To address those concerns in the same manner that they address concerns about the durability of the engine, Ford Motor Company put the 2015 F150 through a variety of rigorous procedures to make sure that the 2015 F150 looks as great in 2020 as it did when it was new.

Facing the Sun’s UV Rays
If you have owned a car or truck for more than a few years, and that car or truck spent the vast majority of the time sitting outside in the sun, you are likely familiar with the damage that can be caused by the same UV rays that can char our skin to a crisp. While the F150 obviously cannot get sunburned, the constant barrage of light and heat from the sun can work to both dull the paint on the exterior while also turning the various trim pieces from black to a dull grey. The sun’s rays can also cause laminated chrome to delaminate – making it look chipped, dull and ugly. This problem can be especially true of pickup trucks that are not properly cared for, as they often spend long hours on job sites in direct sunlight and – more significantly – full size trucks are less likely to fit in a garage, so they spend much of their lives outside.

“Built Ford Tough means more than surviving dirt, rocks and mud, or towing heavy trailers,” said Cindy McComb, materials engineer in the Central Lab. “We like to think our work on this truck has given it the kind of sun protection Built Ford Tough trucks require to look as good after five years of exposure to sun, wind and rain as they do when they leave the showroom floor.”

With the 2015 Ford F150, engineers took the various exterior components of the truck including the painted body panels, the unpainted plastic pieces and even the Ford “blue oval” badge and exposed them both natural and artificial light sources. This included a six month stint out in the elements, after which all of the components were carefully inspected for damage, even that which cannot be seen with the naked eye. In addition to the six month period in the real sunlight, Ford’s engineers used a device named the Thermatron to simulate 5 years of sun exposure in a much shorter period of time; again followed by an intense inspection. Once these components had passed the fade-resistance standards, only then were they approved for the production version of the 2015 F150.

Looking Great in Any Climate
Finally, in addition to facing thousands of hours in both natural light and artificial light, the components of the 2015 Ford F150 were exposed to extended periods of extreme temperatures ranging from 40 degrees below zero (Celsius) to 100 degree blasts of hot steam. The goal is to see if any of the components would fail, fade or crack during these huge swings in temperature and once they were proved to be tough enough to handle the abuse – they were approved for production.

Realistically, the average 2015 Ford F150 owner wont expose his or her new truck to anywhere near the abuse that the Motor Company engineers put their test trucks through, but those extreme testing measures will help to keep your new F150 looking great for years to come.