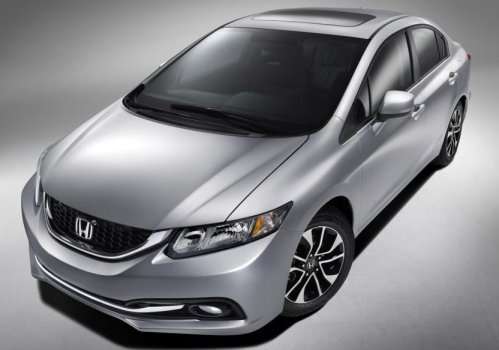 Early this morning, the folks at American Honda dropped the virtual sheet on the new 2013 Honda Civic sedan – a surprising “emergency refresh” after just a year of the newest generation of the popular compact lineup with a public debut planned for the 2012 Los Angeles Auto Show.
Advertisement

Last month, Honda informed dealerships that they were to do their best to liquidate their inventory of 2012 Honda Civic models because the 2013 model year would bring about an “emergency refresh” to the long-popular compact sedan. This comes after the newly redesigned 2012 Honda Civic hit the market with a flurry of bad press – although it should be noted that the 2012 Civic is currently selling at a rate roughly 40% better than the “old” 2011 Civic. You would think that the booming sales figure relative to the outgoing model would be enough for Honda to be happy enough with the 2012 Civic but it looks as though the company wants the new Civic to sell well AND be popular with the automotive media.

Today’s revealed revisions made to the “emergency refresh” 2013 Honda Civic sedan are predominantly aesthetic but Honda has explained that they wanted to infuse “more, premium styling”. From the two images and the minor amount of information offered today by the Japanese automaker, it looks like the company made a defined shift towards the sportier end of the design spectrum and that makes good sense – considering the shift by the segment as a whole to an exterior design that is far more aggressive than the compacts of yesteryear. The vanilla exterior design was one of the points which critics focused on the most so from what we can see, the 2013 Civic is a step in the right direction.

Across the front end, the 2013 Honda Civic sedan features a far more sculpted front end that includes a new lower fascia with chrome accents and a black honeycomb mesh grille with redesigned fog lights on higher end trimlines. A set of clear corner lenses mounted outside of the sharp, angular headlights and a redesigned hood with stronger lines finished off the front end.

Out back, the 2013 Honda Civic sports a new rear bumper design with an integrated lower diffuser across the bottom while the upper rear end gets a set of tail lights that flow into the face of the trunk lid while a horizontal chrome trim piece connects the two tail light housings. These designs, combined with the front end changes and the host of new wheel options are expected to draw attention from new buyers with their upscale, sporty look.

Finally, Honda has hinted that the 2013 Honda Civic upgrades are more than aesthetic, including “a host of safety, feature, comfort, chassis and interior styling enhancements that will further define the top-selling Civic as the best car in the compact class”. The 2012 Civic was criticized for departing from the fun-to-drive spirit of previous generations of the popular Honda compact sedan and coupe but Honda claims to have addressed those problems as well with the emergency refresh 2013 Civic. No indication has been offered as to how else Honda has improved the upcoming 2013 Civic but we could see things like a quieter cabin through suspension and chassis revisions (showing more preference towards the upscale shift) while those same modifications could also help make the new Civic more entertaining to drive.

The rest of the information on the refreshed 2013 Honda Civic will be unveiled on November 29th, when the new Civic makes its formal debut at the 2012 Los Angeles Auto Show. Coincidentally, the 2013 Civic will also go on sale at dealerships around the country on that same day so we can expect pricing information at the same time. With the beginning of the 2012 LA Auto Show just over two weeks away – it will not be long before those hungry Honda buyers around the US will get a full load of information on the refreshed 2013 Civic.

Click the thumbnails above on the right for a larger set of images of the 2013 Honda Civic sedan.

LG's New EV Battery Plant Is a Welcome News for Tesla
Tesla Giga Berlin's New Hurdle: It's Not Only the Gov't, but Now Tesla Itself
END_OF_DOCUMENT_TOKEN_TO_BE_REPLACED