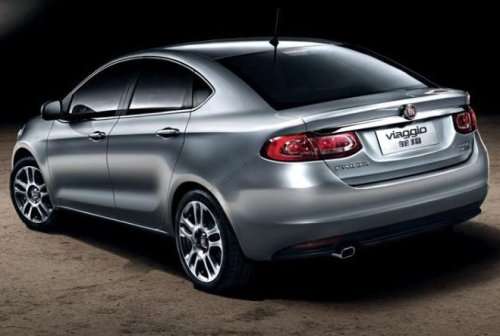 Dodge Dart turned Fiat Viaggio hatchback could be the Chrysler 100

In some non-US markets, the Dodge Dart is sold as the Fiat Viaggio and reports indicate that there could soon be a Chinese-built hatchback version of the Viaggio sold overseas – leading us to wonder if this Viaggio hatchback could lead to the rumored Chrysler 100 hatchback while also introducing the North American market to Chinese-built Chrysler Group vehicles.
Advertisement

There have long been rumors that there would someday be a new model based on the 2013 Dodge Dart and the CUSW platform, dressed up and marketed as the Chrysler 100 but those rumors were refuted by some for two reasons. First, the Chrysler Group led by Sergio Marchionne is working to avoid redundancies between the brands and while making the Chrysler 100 a hatchback would eliminate that redundancy between the Dart and the 100 – the second problem is that no Dart hatchback existed. It seemed unlikely that Chrysler would engineer a new hatchback form for the Dart considering the lower level of interest in 5-door models here in the US but with the possibility of a Fiat Viaggio hatchback being sold overseas – there now seems to be a much better chance of the Chrysler 100 hatchback coming to production here in the US.

There have also been rumors more recently that Fiat planned to build Chrysler Group vehicles overseas, shipping them back into the United States and while these rumors tend to indicate that they would be Jeep models built with less expensive labor in China, the Chrysler 100 could be that Chinese-built, American-sold Chrysler Group vehicle. The Fiat Viaggio hatchback is slated for production at Fiat’s joint venture with GAC at their Changsha production facility where it would be built alongside the Viaggio sedans slated for European sale. The sentiment of avoiding Chinese-built goods here in the US could cause a stigma among prospective shoppers considering the Chrysler 100 but once the development has been completed for the Fiat Viaggio hatchback, the Chrysler Group could just as easily build the Chrysler 100 hatchback on the same assembly line as the Dodge Dart in Belvidere Illinois.

Regardless of where it is built, the Chrysler 100 could be a vehicle that is distinctly unique enough to stand apart from the Dodge Dart in the North American market. In addition to the fact that it could be a hatchback rather than a sedan like the Dart, the 100 could feature a more upscale, luxury themed exterior design that differs greatly from the sporty, aggressive design of the Dart lineup. The Fiat Viaggio is a fine example of the ability to do this; with a grille, a lower front fascia and a tail lamp design that is absolutely nothing like the crosshair grille and racetrack taillight design found on the Dart. The basic shape of the front end of the Chrysler 100 would be similar but the unique appointments all around, the hatchback form and the higher end interior layout would likely allow the 100 to cause no buyer confusion compared to the Dodge Dart.

Further supporting the suggestion of a Chrysler 100 hatchback based on the Dodge Dart is the Chrysler Lancia Concept that appeared at the 2010 North American International Auto Show. While that was little more than a rebadged Lancia Delta hatchback, it provides a bit of foreshadowing that would indicate that the company has considered a compact Chrysler hatchback. That 2010 concept car lead many to believe that it would be a rebadged Lancia when indeed it could turn out to be a rebadged version of a Dodge Dart hatchback.

The Fiat Viaggio hatchback is expected to debut later this year at the Guangzhou Motor Show – at which point we could have a better look at the possible future of the Chrysler 100. Shown above on the right is the sedan version of the European-sold and Chinese-built Fiat Viaggio.

Elon Makes a Cybertruck Statement With an Action, But Quiet in Words
Tesla's Record Month in China: Doubled Registrations in March 2021
END_OF_DOCUMENT_TOKEN_TO_BE_REPLACED