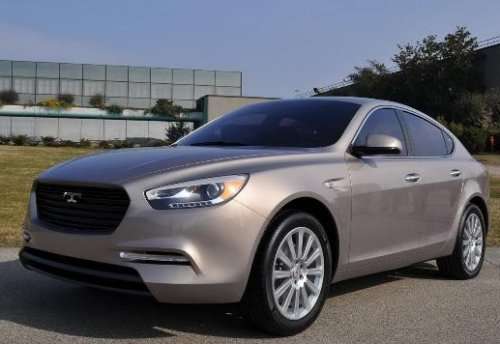 The DeTomaso brand has a long, glamorous history with the most well known being the Ford-powered Pantera sports car in the 1970s and while the rebirth of the DeTomaso brand was expected to bring about a modern Pantera - a recent bankruptcy filing will very likely put the DeTomaso name to rest for once and for all while also killing the chances of a new Pantera supercar.
Advertisement

The stagnant DeTomaso brand was purchased in 2009 by former Fiat executive Gian Mario Rossignolo, who intended to return the Italian automaker to a position of glory with a new crossover and limousine along with the triumphant return of the DeTomaso Pantera. Unfortunately, Rossignolo decided to begin the reincarnation of the brand with his new Deauville crossover (shown in the gallery on the right) in early 2011 which was little more than a Cadillac SRX with a very unique body. Inside, the Deauville looked a great deal like the SRX and while looking like one of Cadillac’s bestselling models in terms of interior amenities isn’t necessarily a bad thing – the Deauville was not what the world was expecting from the “new” DeTomaso brand.

After the DeTomaso Deauville made its debut at the 2011 Geneva Motor Show, things seemed to fall quiet at the Italian automaker although rumors of an upcoming DeTomaso Pantera were almost always floating about – all of which were bolstered by the spyshot video (shown below) featuring what was believed to be the new Pantera in motion. These early rumors suggested that the modern DeTomaso Pantera would be powered by a General Motors V8 with somewhere in the area of 600 horsepower with a shockingly low curb weight of just 2,600lbs. This weight and power combination would have made the new Pantera one of the most powerful cars in the world in terms of power to weight ratio. There were even rumors that the new Pantera would debut at the 2011 LA Auto Show but as that show came and went – along with the rest of the major auto shows through the end of 2011 and the beginning of 2012 –the Pantera never arrived.

During the last year since the DeTomaso Deauville debuted, there has been quite a bit of business news from the Italian automaker including the company selling the rights to the Deauville to a Chinese company, a large investment from an Indian firm and an all-out purchase of the brand to a new owner. However, none of these things ever seemed to happen either and as the money has seemingly run out, DeTomaso has filed for bankruptcy protection. Unless a new suitor steps up to buy the DeTomaso brand, this is likely the final chapter for the once-great supercar builder.

There have been so many Chinese firms looking to purchase existing automakers of late that we could see the DeTomaso brand name pop up under the ownership of a different (possibly Chinese or Indian) firm but with so little substance to the DeTomaso brand – this bankruptcy filing could be the beginning of the end.