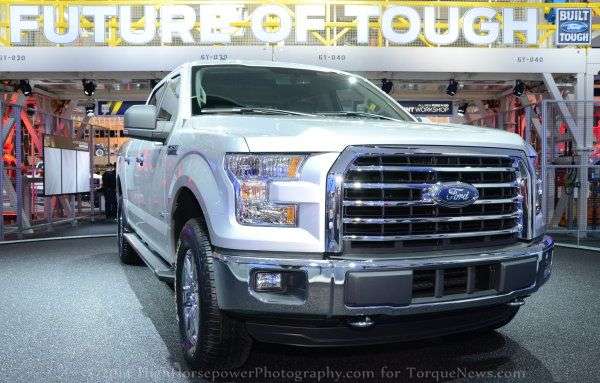 The Ford F150 and the rest of the F Series lineup have been selling in incredible numbers over the past 18 months, but as the arrival of the all new 2015 F150 draws near, sales of the current F150 have slowed as consumers are likely waiting for the launch of the next generation Ford pickup – either to buy that new model or to try to score a deal on a current model.
Advertisement

Through the first six months of 2014, Ford has sold more than 365,000 F Series pickups and the bulk of those numbers are F150 sales. Ford started 2014 with strong growth in January, February, March and April, but starting in May there was a drop in sales followed by a bigger drop in June. While some will try to use an F Series sales drop as a problem of some sort, it was easily predictable after the debut of the 2015 F150 in January at the North American International Auto Show in Detroit.

A sales drop shortly before the debut of any brand new model is to be expected and when this predictable sales decline hits a vehicle that sells in such incredible numbers as the Ford F150, it has what looks to be a much bigger impact than it does on a slower selling vehicle. This drop happens because prospective consumers hold off on making their purchase until the next generation arrives in showrooms and they do this for a variety of reasons.

We All Want the Latest and Greatest F150
The 2015 Ford F150 is expected to arrive within the next few months so people who are looking to buy a new F150 right now are likely willing to wait a few more months to have a newer and presumably better truck. These buyers want to see the new F150 in person in different colors and in different trimlines. Most importantly, they want to be able to drive the next generation F150 before buying a 2014 model. After all, no one likes to spend $50,000 on a truck only to find out that the similarly priced newer model is a whole lot better.

New Models = Discounts on Old Models
When the 2015 Ford F150 begins arriving in dealerships around the country, there will almost surely still be plenty of 2014 F150 pickups at dealerships all over the country. Both the dealerships and Ford Motor Company will want to get these 2014 models off of the lots as quickly as possible, as we can expect to see more wiggle room for dealerships and more incentives from the automaker to buy these “old” trucks. In other words, even if you are 100% sure that you want a 2014 F150 and not a 2015 F150, waiting until the 2015 models arrive could save you some big money on the 2014.

Slow Sales Now Lead to Monster Numbers Later
The good news for Ford Motor Company – and for any company rolling out a brand spankin new model – is that the dip in sales leading up to the arrival of a new model is generally followed by a spike. With a vehicle like the 2015 Ford F150, which is expected to be better in every functional way over the 2014 F150, I expect to see a gigantic sales spike.

The first and biggest group of 2015 F150 buyers will be the normal influx of people who are just snatching up a brand new truck. Over 60,000 people went out and bought a new Ford truck last month and we can expect just as many people to go out to buy the 2015 F150 when it becomes available. Next, there will most certainly be people who have preordered a 2015 Ford F150 so preorders will help drive up the sales in the first few months after the 2015s arrive. Finally, we have the people who I talked about above; the people who have specifically held off for the new models rather than buying a 2014 F150 and the people who have waited for the 2015s arrive to get a bigger discount on the 2014 models.

In other words, while the Ford F Series sales might be down right now, look for huge sales later this year when the 2015 F150 hits dealerships. Ford is on pace to sell around 730,000 F Series trucks right now, but I expect the final numbers at the end of 2014 to be much higher than that.