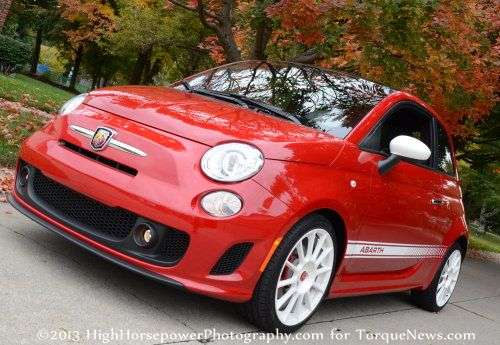 As the 2012 calendar year drew to a close, the Chrysler Group did in December what it had done throughout the year – being among the strongest of the automaker groups in terms of sales growth while also closing out the year as the best of the Detroit Big 3 in year over year growth.
Advertisement

On the year, the Chrysler Group sold a total of 1,651,787 new vehicles in the US, ranking them fourth overall behind Ford Motor Company, General Motors and Toyota Motor Co. That figure accounted for an increase of 21% throughout the entire 2012 calendar year which places Chrysler third in growth behind only Toyota and Honda.

Fiat
The top brand from the Chrysler Group in terms of sales growth was Fiat with the Italian compact car selling almost 60% more units in December 2012 than were sold in December 2011 as the company moved an impressive figure of 3,707 new Fiat 500 models last month. That number is comprised entirely of Fiat 500 models, either in hardtop, convertible or Abarth trim.

Fiat was also the Chrysler Group’s best performing brand in terms of annual sales growth as Fiat was the top brand in the entire industry with an improvement of 121% during 2012. Fiat sold 43,772 vehicles in 2012 compared to just 19,769 in 2011 and what makes that growth even more impressive is the fact that the brand is still existing (and flourishing) on just a single model. All Fiat sales in the US since the brand was re-introduced in 2010 have been based on the Fiat 500 in hardtop, convertible or the high performance Abarth trim. We can expect things for Fiat to continue to improve in 2013 with the introduction of the 500 Abarth Convertible, the low production 500e and the roomier Fiat 500L.

Dodge
The Dodge brand ranked second among the Chrysler Group in terms of December 2012 sales growth with a jump of 26% while 52,391 new vehicles sold comfortably made Dodge the company’s bestselling brand last month. The Dodge Journey led the brand in growth with a jump of 63% while the Challenger and came in second with an improvement of 20%. The Avenger and Caravan lineup tied for third in year over year growth in December 2012 with increases of 19% each. In terms of sales volume, the Caravan lineup was tops with 14,160 minivans sold in the US during the month of December 2012. The Dodge Charger narrowly beat out the Journey for the second spot by a margin of 7,867 to 7,688, leaving the Journey to settle for the third spot. The Dodge Dart made its biggest contribution to date with 6,105 units sold making December 2012 the best month thus far for the sporty compact sedan.

For the 2012 calendar year, Dodge moved 524,989 new vehicles which accounts for an increase of 16% compared to 2011. While that 16% growth rate puts the Dodge brand in the second to last spot compared to the other Chrysler Group brands, Dodge was the company’s top name in terms of annual sales volume in 2012. With an increase of 51%, the Dodge Avenger was the best model in terms of growth followed by the Journey (up 44%) and the Caravan (up 28%). The popularity of the current Dodge lineup combined with the growth of the new Dodge Dart should help the Dodge brand continue to grow through 2013 – especially if Sergio Marchionne makes good on his promise to kill off the Chrysler Town & Country minivan. This would direct all new Chrysler Group minivan buyers to the Caravan and that should add someone in the area of 100,000+ new models sold to Dodge.

Ram
The Ram Truck brand was Chrysler’s third best performer in December 2012 with an increase of 16% coming from 30,885 new trucks and work rated minivans sold around the country. As has been the case all year along, the Ram pickup family was the major contributor to both the strong growth and sales volume figures as the mighty Ram accounted for 30,211 of those units sold (up 16%) while the other 674 units coming from the Ram C/V (up 287%).

For the 2012 year, the Ram brand ranked third among the Chrysler Group in terms of growth with a jump of 17%. Ram sold 300,928 total vehicles in 2012 with 490 of those being the now-gone Dakota, 7,075 being the Ram C/V and the other 293,363 coming from the Ram pickup lineup – a sales figure which made the Ram pickup the 7th bestselling vehicle in America last year. The Ram pickup family was the only model with a real growth rate in 2012 (up 20%) as the Ram C/V was new and the Dakota was put to rest. Considering the number of awards given thus far to the 2013 Ram 1500, we can fully expect to see the Ram brand continue to grow in 2013 thanks to the fully revised half ton truck that serves as the company’s bestselling single model.

Chrysler
The Chrysler brand ranked fourth in terms of December 2012 sales growth with the company’s luxury arm growing by 6% in moving 25,513 new sedans and minivans. In terms of growth, only the 300 sedan showed a positive growth (up 40%) while both the 200 and the Town & Country showed slight declines in growth of 1% and 4%, respectively. Chrysler was led in sales by the Town & Country minivan with 9,258 units sold followed by the 200 with 9,080 new models sold while the 300 ranked third with 7,175 units sold.

In terms of annual growth, the Chrysler brand was the company’s second best performer with a jump of 39% on the year placing them behind only Fiat. Overall, Chrysler ranked fourth among all major brands, trailing only Fiat, Smart and Lamborghini in year over year growth for 2012. The 300 led the way in growth with an improvement of 95% followed by the 200 sedan that climbed 44% and the Town & Country minivan pulled up the rear with an increase of 18%. Chrysler moved a total of 307,967 vehicles in 2012 with the 200 being the top model (125,476) followed by the Town & Country (111,744) and the 300 (70,747). 2013 will be an interesting year for the Chrysler brand with no major additions planned for the lineup but with rumors of a replacement for the Town & Country being more of a compact crossover and a possible Chrysler 100 coming with the underpinnings of the Dodge Dart – there could be two new vehicles in two new segments for Chrysler very soon.

Jeep
The Jeep brand pulled up the rear for the Chrysler Group in terms of December 2012 growth as Jeep was the only moniker that showed a negative growth in the final month of the year. The Jeep brand is expected to change quite a bit in the next 18 months including a new Liberty and a refreshed Grand Cherokee – models which consumers may be holding out for rather than buying existing models. Only two models showed positive growth for Jeep last month with the Patriot leading the way with a 4% increase while the Liberty was second with a jump of just 1%. In terms of monthly sales volume, the Grand Cherokee led the way with 17,121 SUVs sold followed by the Wrangler with 11,545 units sold and the Patriot with 4,566 examples of the compact SUV sold.

For the 2012 calendar year, the Jeep brand moved 474,131 new models which accounted for an increase of 13%. This made Jeep the weakest of the Chrysler Group brands in terms of growth while the sales volume put Jeep behind only Dodge within the company. While the brand as a whole struggled relative to the rest of the brands in 2012, four of the five models from Jeep showed positive growth last year. The Grand Cherokee led the way with a 21% increase followed by the Wrangler at 16% while the Patriot and Liberty tied with growth of 13% each. Only the Jeep Compass – which is slated to be killed off in the near future – showed a negative growth rate in 2012. In terms of sales volume, the Jeep brand was led by the Grand Cherokee with 154,734 units sold followed closely by the Wrangler which moved 141,669 units. The Jeep Liberty was a distant third in terms of brand sales for 2012 with 75,483 units sold but with a new Liberty (that may not use that name) on the horizon, we can expect to see things improve for the “Trail Rated” brand in 2013.

SRT
2013 will also bring about yet another brand to the Chrysler Group sales statement as the new SRT Viper is scheduled to begin reaching owners and dealerships in the next few months. The new Viper will not have a big impact on the total sales figures but it will be good to see the Viper back in production once again.