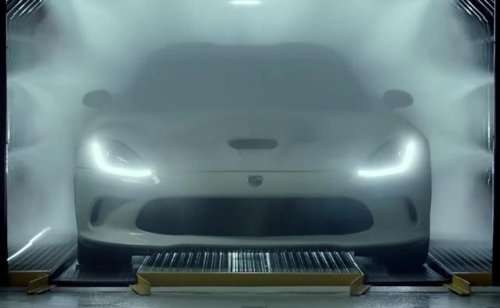 This past weekend, the Chrysler Group launched the first advertising campaign specifically for the SRT Brand and in fine “go big or go home” fashion – the Street and Racing Technology division hit the airwaves with four versions of the same commercial.
Advertisement

The first ever SRT Brand advertising campaign entitled “Body and Soul” is technically one commercial but the Chrysler Group advertising gurus have developed four different versions for this campaign. Television viewers are likely to see the 30, 60 and 90 second commercials across the various cable networks while internet users enjoy a special 137 second (2 minute, 17 second) extended version of Body and Soul. The Chrysler Group announcement didn’t go into any detail as to what channels would be running these commercials or during what programs we could expect to see these commercials (particularly the 90 second spot that is typically reserved for big events like the Daytona 500 or the Super Bowl) so to make sure that you can see every one of the four new commercials – they are all included at the end of this piece.

“We wanted to infuse our first-ever SRT creative campaign with grit, beauty, longing, desire and nostalgia for the tradition and history of the automobile but to also give a nod to the relationship between the machine and its maker,” said Olivier Francois, Chief Marketing Officer, Chrysler Group LLC. “The Charger, Challenger, Viper, Grand Cherokee and 300 are inextricably linked not only to those who build the machines but to those who dream one day of owning one.”

It should be noted that Body and Soul does not mark the first appearance of these high performance SRT vehicles in a television commercial as the Dodge Charger SRT8, the Dodge Challenger SRT8, the Chrysler 300C SRT8 and the Jeep Grand Cherokee SRT8 have all made appearances in commercials for their individual brands over the past few years but this is the first time that Chrysler has offered up a TV ad campaign specifically for the SRT Brand.

“‘Body and Soul’ personifies the connection that owners feel with their vehicle; it’s that feeling of when you get behind the wheel and step on the throttle for the first time and feel the power of the engine. It’s that feeling and legacy that Chrysler Group has forged with owners and their vehicles over the last century; something that SRT brand is creating with a new set of consumers for the first time,” said Ralph V. Gilles, President and Chief Executive Officer – SRT Brand and Motorsports, Chrysler Group LLC. “The launch of this campaign marks a significant step forward for us and establishes the SRT brand’s legacy as a vital component of our company.”

The recent Chrysler Group advertising campaigns – especially those that run on television – have taken a far more dramatic approach and the SRT Body and Soul campaign is no different. As has been the case with the recent “How To” do this and that ads for the Dodge Dart, Body and Soul features a rapid succession of strong automotive and lifestyle video clips accompanied by a “deep voice guy” providing narrative that tells the story of a car guy coming of age. From suffering through a long car ride in the back of his parent’s Dodge station wagon to getting his license so that he can cruise main street (in a 1973 Dodge Challenger) to doing burnouts and donuts in a 1968 Plymouth Road Runner – Body and Soul walks us through every gearheads ideal entry into the car world.

The centerpiece of the SRT Brand is the 2013 SRT Viper and as the longer commercials draw on, we are privy to design and production shots of the incredible new Viper followed by some fleeting images of it roaring along the countryside – and disturbing nature from afar simply by revving the engine. While brief, those who have fallen in love with the new Viper should find Body and Soul to be company-issued car porn at its finest so crank up your speakers and enjoy these four different versions of the new SRT Brand television adds which are including below with the shortest first and the longest last to give you a good look at what makes these four clips different.