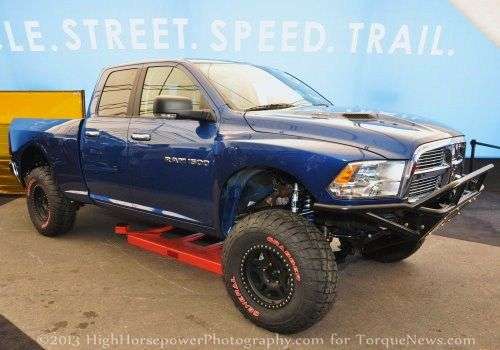 The Chrysler Group offers an array of modifications through their Mopar aftermarket catalog to help a standard production Ram 1500 compete with the mighty Ford SVT Raptor F150 but a new report suggests that the Ram Brand might be looking to offer a factory-built version of their Ram Runner package to allow Ram owners to fight the Raptor without the headache of building their own offroad performance pickup.
Advertisement

The Chrysler Group and their Mopar aftermarket performance division teamed up a couple years ago to produce the Ram Runner Concept – a super modified version of the Ram 1500 that would compete in the high performance offroading segment with the popular Ford SVT Raptor F150. The problem with the Ram Runner package is that it is only available as a kit that the buyer then has to have installed whereas a Raptor buyer can walk into almost any Ford dealership in the country and drive out with a high performance pickup designed to face the toughest terrain at high speeds. Once completed, the Mopar Ram Runner package has all of the benefits of the Raptor but the owner has to either pay a shop to perform the lengthy list of modifications or do them at home themselves after they purchase the package from Mopar. While this is ideal for someone who has the capacity to cut apart their brand new Ram 1500 to build a Ram Runner or for someone who wants to pay a shop to do the work but in the long run, acquiring a Ram Runner is a great deal more expensive and time consuming than acquiring a Raptor.

Luckily, according to Wards Autos, the Chrysler Group is considering a production version of the Ram Runner that would be available in dealerships – just like the Raptor F150. Chrysler is reportedly looking at the possible sales volume of a production version of the Ram Runner and if they think that there will be enough interest in this high performance offroad package for the Ram 1500 – we could see a Raptor fighter in Chrysler Group dealerships in the near future.

I have had multiple opportunities to speak with folks from the Mopar division who explained that the Ram Runner really isn’t all that labor intensive of a package so someone with a fair amount of mechanical capacity can literally buy the parts from Mopar and install them in their garage. The majority of the parts are simple bolt-on items and when completed, the Ram Runner is actually better prepared for the worst offroading conditions than is the Raptor thanks to the addition of the tubular front bumper and the rear tire carrier – features which are not available on the Raptor. Joining those items to create the Ram Runner exterior are front and rear offroad fenders that allow for vastly more tire travel and a sport performance hood with the only item that doesn’t simply bolt up being the rear fenders that require some body shop expertise. A Mopar cold air intake and a dual exhaust package for the 5.7L Hemi help the Ram Runner breath a little better on both ends with a Pre Runner Stage II lift kit adds a variety of high end, high performance suspension components that allow the Ram Runner to vastly exceed the capabilities of the Raptor. The only part of the Ram Runner Concept that was not carried through to the Mopar Ram Runner upgrade package was the wheel and tire combo – which Mopar states is left to the preference of the truck owner.

One of the biggest obstacles facing the production version of the Ram Runner is likely the cost. When you put together the list of features in the Mopar Ram Runner package, the tubular front bumper ($1,250), the tire carrier ($1,010), the wide front fenders ($1,020), the flared rear fenders ($1,350), the sport performance hood ($978), the cold air intake ($466), the catback exhaust system ($1,135) and the Pre Runner Stage II suspension setup ($13,270) carry a rough MSRP of $20,470. However, when we look at the fact that the removal of the tailgate for the tire carrier likely won’t float in production form and the offroading front bumper might be a little questionable, that price for the exterior upgrades drop by $2,260. The cold air intake and catback exhaust features really aren’t needed to turn the Ram 1500 into a Raptor killer so you can also remove that $1,601 from the final production price. Also, while the sport performance hood looks great…it doesn’t make the Ram Runner any more capable on road or off so that is another $978 that you can remove from the price. The image above on the right shows a standard production Ram 1500 with the fenders, hood, front bumper and suspension setup of the Ram Runner package along with a set of offroad friendly rims and tires – showing how well this package will mate up to a normal production pickup. Also, our gallery (click any thumbnail to view larger images) shows the Ram Runner in full concept form from the 2010 Detroit Auto Show.

In the long run, the only features that the Ram Runner production version really NEEDS to be the Raptor-fighting beast are the front and rear fenders, the front bumper (or some variation of it that allows lots of approach clearance) and the substantial suspension package. Just those features have a retail price of $17,320 and the Ram Runner package is only available for Ram 1500 Quad Cab pickups with a 6’4” bed – a truck which carries a current base price (Tradesman, 4x4, Hemi) of $31,675 with destination. When you add the essential Ram Runner components to the least expensive four wheel drive, Hemi powered Ram 1500 Quad Cab you get a rice (again, using retail figures for everything) of $48,995. Compared to the $47,525 base price of a Raptor SuperCrew (using a comparable cab size), the Ram Runner would only be a touch more expensive while offering a much higher performance suspension package. At the same time, Mopar could offer a suspension setup that is a little closer to what is found in the Raptor (rather than relying on the $13,000 Pre Runner Stage II kit) and bring the price down even further. The Ram Runner production model would also offer more cargo space with the 6’4” bed since the Raptor is only available with Ford’s 5’6” box.

Unfortunately, the fate of the production variant of the Ram Runner may be left in the hands of the bean counters with the talk via Wards of proper sales figures. When we break down the package into components and remove those which are not essential to the goal of beating the Raptor – adding them to the least expensive Ram 1500 variant on the market – it certainly seems like the Ram Brand could put together a factory production pickup that would beat the SVT Raptor F150 with a smaller price tag…and that is something that bean counters love. Here’s hoping!