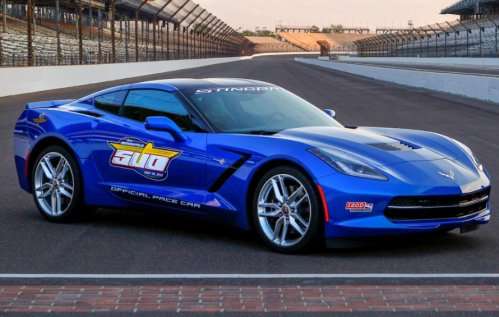 General Motors announced today that the 2014 Chevrolet Corvette Stingray Coupe will serve as the official pace car for this year’s 97th running of the famous Indianapolis 500 race – marking the 12th time that the Chevy sports car will lead the field to the green flag on the Brickyard.
Advertisement

“It is an honor to help inaugurate the all-new Corvette Stingray at the hallowed Brickyard and further the legacy between Chevrolet and the Indianapolis 500,” said Jim Campbell, GM vice president of Performance Vehicles and Motorsports. “The 2014 Corvette Stingray’s performance was influenced by racing, making this prestigious assignment even more fitting.”

The 2014 Chevrolet Corvette introduces the world to the seventh generation of the fabled American sports car and like so many American performance cars before – the Indy 500 will help promote the 2014 Stingray on one of the grandest motorsport stages in the world. Even though American race fans may prefer the Daytona 500 over the Indy 500, General Motors is planning on the new Corvette Stingray being a hit of global proportions and with open wheel racing having a much greater presence around the world, the Indy 500 has a different fan base than the top NASCAR race.

The 2014 Chevrolet Corvette Stingray Coupe being prepared to be the 2013 Indy 500 pace car has no modifications outside of the required safety items including lights around the outside of the car and the special decals. The drivetrain is identical to the production setup with the new 6.2L LT1 V8 providing 450 horsepower and 450lb-ft of torque to allow this street-ready Corvette stay out in front of the hard charging Indy cars.

2013 marks the 24th time that a Chevrolet product has served as the Indy 500 pace car. The first Chevy to lead the field on the Brickyard came back in 1948 when the Chevrolet Fleetmaster served as the first ever Chevy pace car. With the 2014 Corvette Stingray serving as the 2013 Indy 500 pace car, this is the 12th time that the Corvette has lead the Indy field to the start of the big race.

2013 marks the 12th straight running of the big race where a Chevrolet served as the pace vehicle and in the last 11 years prior to 2013, 7 of those years also saw a Corvette lead the field to green. The Chevrolet Camaro has served as the pace car 7 times (most recently in 2011 along with 2009 and 2010) while the Chevy SSR sport truck was the only vehicle to lead the Indy 500 field in the last decade that was not a Camaro or Corvette. Other notable Chevy Indy 500 pace cars included the Monte Carlo in 1999, the Beretta in 1990 and the Bel Air in 1955.

“Chevrolet is a great partner of the Speedway,” said Jeff Belskus, Indianapolis Motor Speedway Corporation president and chief executive officer. “That connection is heightened this year with the next-generation Corvette in front of a very talented field of racers.”

Not only is Chevrolet a popular choice for the Indy 500 pace car but the Chevy brand has also been a popular engine choice for racers. Chevrolet had a variety of V8 powered Indy cars in 1986-1993 and 2002-2005 along with a new twin turbo V6 engine that was introduced in 2012. Over the course of those years as an engine provider for the Indy car world – a Chevy engine was responsible for 118 race wins including 7 Indy 500 wins and 7 driver championships.

If past years are any indication, the fact that the 2014 Corvette Stingray is serving as the official Indy 500 pace car will likely lead to a limited production run of "pace car edition" Corvettes - as similar limited edition models over the past few decades sporting the Indy 500 logo have proven to be popular collector's items for race fans and GM enthusiasts alike.