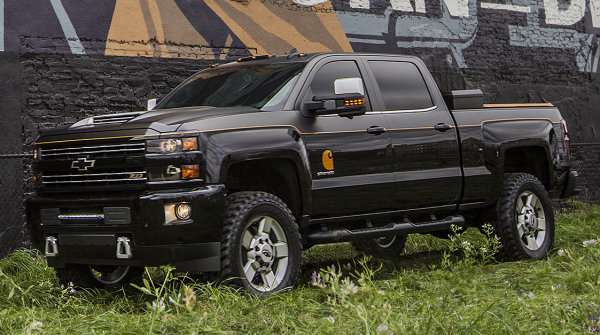 General Motors offered up their first SEMA teaser today in the form of the Chevrolet Silverado 2500HD Carhartt, which is only a concept show vehicle right now, but it looks like a special edition package that could easily see production – as it is a fairly mild concept for SEMA.
Advertisement

While we can expect to see a big spread of high performance cars in the big Chevrolet display at next week’s SEMA Show, the first vehicle shown off ahead of the big Vegas convention is a Chevrolet Silverado. To be exact, GM has virtually introduced the world to the 2017 Silverado 2500HD Carhartt concept and while it is only a concept truck and show vehicle right now, this Silverado has the making of a great special edition package.

“Thousands of people go to work every day and earn their paycheck in a Chevy truck while wearing a Carhartt,” said Piszar. “Those products’ durability and versatility earn respect and loyalty that’s passed on — and that’s exactly what this concept explores.”

The exterior package of the 2017 Silverado 2500HD Carhartt Concept includes a list of upgrades including trailering mirrors with an integrated camera system, black bowtie badges, side steps, bed lighting, a 20 inch light bar, electrical outlets in the bed, “antique nickel” accents on the grille, mirrors, tow hooks and the unique 20 inch wheels. There is also a bed toolbox with a swing out tool chest, making the bed the perfect place to store your tools when headed to and from the worksite.

On the inside, the 2017 Chevrolet Silverado 2500HD Carhartt Concept has a Jet Black interior with the signature Carhartt “duck brown” cloth on the seats, arm rests and door panels – with the Carhartt logo etched on the leather headrests.

Finally, the 2017 Silverado 2500HD Carhartt SEMA Show truck is powered by the new 6.6L Duramax diesel V8, with 445 horsepower and 910lb-ft of torque – making this one of the most powerful trucks on the market. There is no mention of a suspension upgrade, but the Silverado in the picture above appears to sit a little higher than your average 2500HD Chevy, so I suspect that it has some sort of factory suspension upgrade to get the high riding stance with the 20 inch wheels.

"When Carhartt and Chevy started working together on this concept truck, we quickly realized that our mutual respect for hardworking people and the utility they expect from our brands would equal the ultimate truck for anyone who works and plays in the rugged outdoors,” said Tony Ambroza, senior vice president of marketing at Carhartt. “For more than 127 years, Carhartt has designed workwear by solving for the needs and practical ways hardworking people use every product we make, and that’s the same kind of thinking we applied to this collaboration.”

Right now, this is just a show truck, but the list of modifications is simple enough that this Carhartt truck could most certainly become a special edition package. With Carhartt being so popular among truck owners in the hard-working world, pairing the hard-working brand with a hard-working truck like the Silverado 2500HD would certainly make sense.

The 2017 Silverado 2500HD Carhartt Concept will debut formally next week at the 2016 SEMA Show at the Las Vegas Convention Center.

Tesla Contemplates A New Strategy for China Retail even As Sales Boom
Jay Leno on Elon Musk & EVs: “I Think He Should Get ... Credit"
END_OF_DOCUMENT_TOKEN_TO_BE_REPLACED