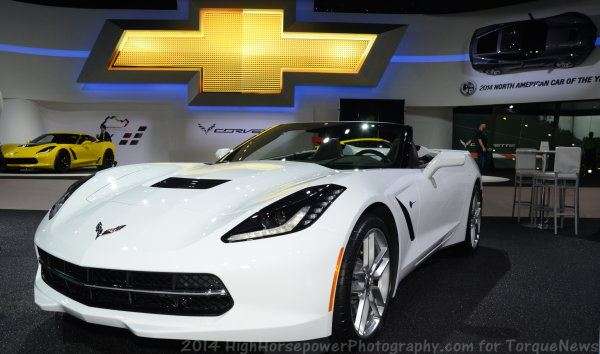 Chevrolet Performance Catalog Could Get 2015 Z06 Parts for Stingray Owners

Based on the Chevrolet Corvette Stingray spread on display at the 2014 SEMA Show, it looks like there is a good change that the performance parts division could begin offering key components from the 2015 Z06, allowing Stingray owners to get some of the go-fast features of the super-Vette without laying out “Z06 money”.
Advertisement

The 2015 Chevrolet Corvette Z06 is incredible for a long list of reasons, but even with a price that makes it far less expensive than many European exotics that the Z06 would destroy – the price tag of $79k just isn’t in everyone’s range. There are likely more than a few new Corvette Stingray owners who would have liked to get a Z06, but for one reason or another, they went with the Stingray. Based on one of the Stingray show cars at SEMA 2014, those Stingray owners could soon buy some of the individual components of the Z06 to improve the performance capabilities of their Corvette with GM parts.

Essentially, those are all of the components that help to make the 2015 Corvette Z06 the most track capable Corvette ever. When adding all of these items, the Stingray should have very comparable stopping and cornering capabilities as the Z06, with the main differences being the exterior look of the Z06 – and the 650 horsepower supercharged LT4 V8.

It should be noted that having a SEMA Show car with Z06 parts is by no means a guarantee that the GM performance parts division will begin selling these Z06 components for Stingray owners, but this concept car will help the automaker gauge the interest of owners. Provided that they see enough interest, these components could all arrive in the performance parts catalog very soon and when that happens – Stingray owners will be able to enjoy almost the same world class handling as Z06 owners.

That being said, I almost expect to see the GM performance parts catalog offering the key features from the 2015 Z06 based on the company’s willingness in the past to offer parts from high performance models to owners of other models. For example, many of the features of the Camaro Z28 and Camaro ZL1 are available to Camaro V6 and SS owners. Offering the Z06 parts is only being discussed right now, but with enough attention from Stingray owners – we should be seeing those items on sale in the coming year or so.