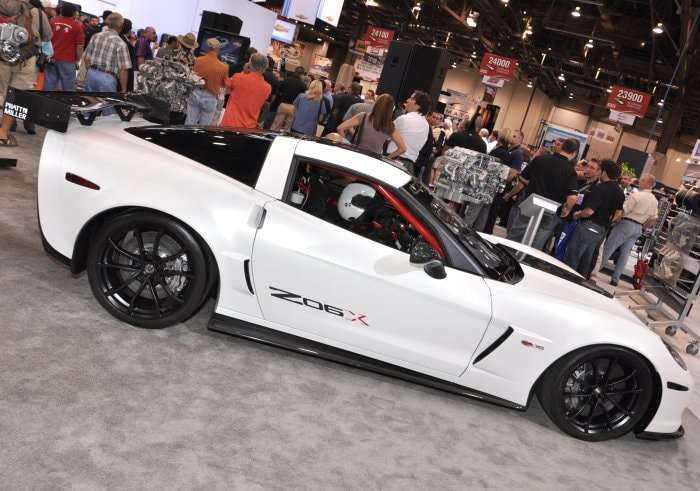 Spy shots floating around the internet suggest that Chevrolet might be working on a hotter version of the Corvette Z06 that looks similar in its feature availability to the 2010 Z06X Concept from SEMA.
Advertisement

Yesterday, the folks at Autoblog shared pictures of a Chevrolet Corvette Z06 test car (images that we do not have permission to use) with an interesting paint scheme and the big rear wing from the ZR1 ZTK package. The rest of the exterior bits appeared to be the same as the “normal” Z06, but in addition to the unique color scheme and the big wing, this mysterious Corvette test car has a roll cage that has been color-matched to the exterior.

This Corvette Z06 with unique paint and the ZR1 ZTK wing leads me to believe that Chevrolet might be working on a production version of the C6 Z06X Concept for the C7 generation.

The 2010 Corvette Z06X Concept
Back at the 2010 SEMA Show in Las Vegas, Chevrolet Performance showcased the Corvette Z06X Track Car Concept (shown above in black and white). This concept car was designed to showcase the then-new Z07 performance package, which incorporated the magnetic suspension setup and the carbon fiber brakes from the C6 ZR1 into the Z06 package.

In addition to the Z07 package, the Z06X Concept was fitted with a big adjustable rear wing, a roll cage, racing seats, lightweight wheels wrapped in road racing tires and some adjustable suspension bits to make the machine more track-capable.

Finally, the Z06X Concept had a stripped out interior, so while it had racing seats, harness, a camera system and a roll cage, it did not have carpeting, sound insulation or the radio system. It also had a satin white paint scheme with black trim and unique emblems.

The Mysterious Z06 Test Car
The mysterious Corvette Z06 test car is matte black with bright orange trim on the body, brake calipers, rear wing and roll cage. Like the Z06X, this test car has a big rear wing (from the ZR1) and a roll cage. Of course, it might have a beefed-up cooling setup and some adjustable suspension components, but we can’t see those things in spy shots.

We can see that it has the Competition seats, but unique features for a C7 Z06 that we can see include the ZR1 ZTK big wing, the roll cage and the unique color scheme – all of which could be found on a production version of the old Z06X Concept.

Now, if Chevy cooks up something like that C6 Z06X Concept for production purposes, we can expect a few differences from the 2010 concept car. Most notably, I hope that this car will be street legal and if it is, we are almost guaranteed to see the premium infotainment system remain intact. It will likely have carpeting as well, but the company might ditch the sound insulation to cut some weight.

On the other hand, if this car turns out to be a track-only model, it might be devoid of all premium features such as the infotainment package and other interior comfort items.

I should point out that including a roll cage from the factory opens up all sorts of problems for the automaker when it comes to crash testing, but the rest of the package could be sold ready-to-race, with the buyer purchasing the cage from GM’s performance division – allowing the company to avoid dealing with crash testing with the cage.