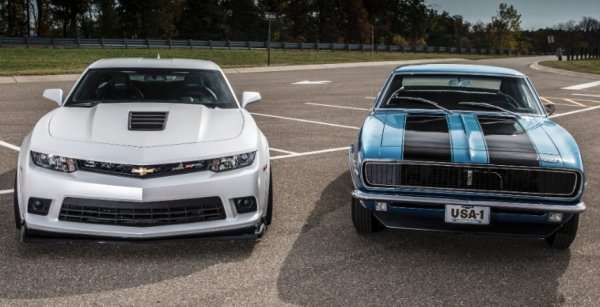 The Chicago Auto Show has come and gone without any word on the new Chevrolet Camaro Z/28 and with so many people expecting it to be introduced sometime this year, I wonder if GM won’t try to steal some high performance thunder at the New York Auto Show in April.
Advertisement

General Motors hasn’t offered up any official information that there is a new Chevrolet Camaro Z/28 on the way, but the general consensus of the online automotive community is that there has to be a new road-gripping Chevy muscle car on the way.

The Camaro Crash in Germany
The key bit of information supporting the belief that there is a 6th gen Camaro Z/28 in development is the video captured at the Nürburgring last year, showing a Camaro test car slamming hard into the wall of the famed German road course. We know that Chevrolet was at the Nürburgring to test the new Camaro ZL1, but we also know that the Camaro which was caught crashing on camera had a far more elaborate aerodynamics package.

These aerodynamics are believed to belong to the new Camaro Z/28, which would (in theory) be a car designed to dominate a road course in an even grander fashion than the new ZL1 and rumors suggest that this track-ready Chevy will arrive for the 2018 model year.

The “problem” with the rumor of a 2018 Chevrolet Camaro Z/28 is that a car built for the 2018 model year would go on sale late in 2017 and, in most cases, that new vehicle would have been introduced earlier in the 2017 calendar year. For example, a 2018 model year car will usually be introduced at either the Detroit, Chicago or New York auto shows and with the Detroit and Chicago shows passing without a new Z/28 – that leaves New York as the next most logical choice.

The Z/28 Big Apple Debut
If the 6th gen Chevrolet Camaro Z/28 is going to drop for the 2018 model year on a “normal” rollout schedule, it would almost have to be introduced in New York. That is the last major auto show in the first half of the year, with the next big show coming in November in LA. The problem with LA is that by the time that show starts, many 2018 model year vehicles will already be on sale.

In other words, if the new Camaro Z/28 is coming for 2018, it will almost surely debut in New York and with the 5th gen Camaro Z/28 debuting at the 2013 New York Auto Show, another Z/28 rollout in the Big Apple would make sense.

The “problem” with a New York debut is that Dodge is set to roll out an even more powerful version of their Hellcat Challenger in the Big Apple, so any muscle car introduced by Chevrolet will have to fight for headline time with a Dodge which will likely have far more power. On one hand, that could be a bad thing for Chevrolet if the Dodge draws more attention, but on the other hand, introducing the new Z/28 in New York could allow GM to steal some of Dodge’s thunder.

In any case, I am hoping to see a new Camaro Z/28 in New York, as an absence of the new Z in April could mean that the road racing specialists might not arrive on time for the 2018 model year.