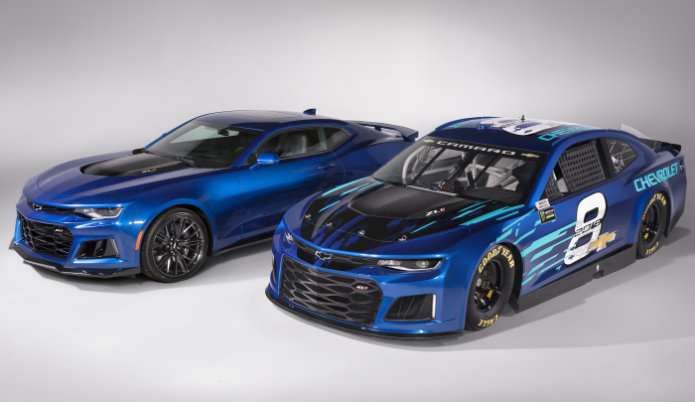 The Chevrolet Camaro ZL1 is Coming to NASCAR - Sort Of

General Motors has announced that their 2018 NASCAR Monster Energy Cup Series race cars will be based on the appearance of the Chevrolet Camaro ZL1 and based on the initial images, the next Chevy race car really looks fantastic – doing a great job of representing the aggressive design of the Camaro ZL1 road car.
Advertisement

Before getting into the design of the 2018 Chevrolet NASCAR entry, I want to make it very clear (for those who are unaware) that the Camaro ZL1 race car competing in the 2018 NASCAR Monster Energy Cup Series doesn’t share any components with the production road car. From the chassis construction to the brakes to the suspension to the engine, nothing on the NASCAR Camaro ZL1 will be shared with the Camaro ZL1 road car aside from the basic exterior appearance. This has been true of all NASCAR race cars over the past few decades, but with the arrival of the 2018 NASCAR Camaro ZL1 – the Chevrolet “stock car” looks more like the road car than any of the past vehicles that GM has offered up for the popular race series.

Camaro Coming to the NASCAR Bigs
The Chevrolet Camaro has been utilized in the NASCAR Xfinity Series (formerly Busch Grand National) for years now, but the NASCAR big leagues – the Monster Energy Cup Series (formerly Winston Cup) – has spent the past seasons using a race car based on the Chevrolet SS. Before that, the Chevrolet products competing in NASCAR’s pinnacle series used the Impala, the Monte Carlo and the Lumina while the famed Camaro has never been the choice of Chevy’s most successful NASCAR drivers.

However, with the Chevrolet SS leaving production this year, GM was tasked with replacing it in the Monster Energy Cup Series and do to so, they have designed a new NASCAR racer based on the appearance of the new Camaro ZL1.
“Chevrolet, Camaro and ZL1 are all synonymous with winning, both on and off the track,” said Reuss. “We are thrilled to run Camaro in NASCAR next year, with the time-honored and track-tested ZL1 badge, and we’re just as excited for our drivers, teams, fans and customers.”

A Camaro Race Car with Camaro Looks
One of the key complaints with the Chevrolet race cars in NASCAR over the past few decades has been that the cars on the track aren’t shaped anything like the cars on the street. NASCAR has always used a basic 2-door coupe shape, even though the cars don’t actually have doors, but other than the Monte Carlo and the old Lumina, all of the recent Chevrolet race cars have been based on sedans – so while the stickers may have said Impala or Chevy SS, they didn’t actually look like the road cars.

That changes with the arrival of the NASCAR Camaro ZL1. While the Camaro ZL1 race car has unique body lines along the sides, over the top and out back, the front end of the new race car appears to be very similarly shaped to the Camaro ZL1 road car. This includes the massive lower grille opening and the overall shape of the front fascia, right down to the brake cooling ducts and fake fog lights mounted on the outer corners of the front end. The Camaro ZL1 race car also appears to have a hood with a similar contour to the road car and the sculpting lines across the top of the race car’s rear quarter panels mimic the look of the road car.

There are obvious differences, but there is no question that the 2018 NASCAR Camaro ZL1 does a better job of representing the Chevrolet road car than any Chevy entries in the recent history of NASCAR’s highest ranks.

“Racers have long relied on Camaro to win races and championships in amateur and professional sports car and drag racing, as well as the NASCAR XFINITY Series,” said Jim Campbell, vice president, Performance Vehicles and Motorsports. “We look forward to racing the Camaro ZL1 in the premier Monster Energy NASCAR Cup Series.”

Now that the Chevrolet Camaro ZL1 is joining NASCAR big leagues, hopefully that will lead to a similar move by Ford Motor Company. Ford Monster Energy Cup Series teams currently campaign a Fusion race car, based on a front wheel drive midsized sedan, but the Xfinity Series teams run a Ford Mustang race car. It would be great to see the Mustang and Camaro going head to head in America’s most popular racing series at the same time that they are going head to head on the street.