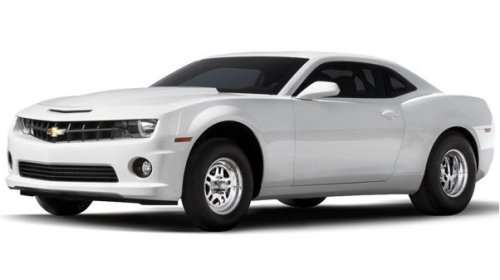 Those hardcore drag racers who are looking to build their own 8-second 2013 Chevrolet Camaro rather than buying the mighty COPO Camaro drag racing package will be able to begin the process as the new Chevrolet Performance Camaro rolling chassis goes on sale this Thursday with a price of just $55,000.
Advertisement

For those unfamiliar with the phrase “rolling chassis”, this new Chevrolet Performance Camaro drag car comes without a drivetrain so as opposed to a “turnkey” COPO Camaro that comes out of the box ready to roar down the quarter mile - this new rolling chassis package doesn’t have an engine, transmission, rear end gearing or the drivetrain electronics. The lack of those components comes with a hefty discount compared to the mighty COPO Camaro (which costs $86,000+) with this new rolling chassis carrying an MSRP of $55,000.

"This is a great opportunity to buy a factory-built foundation for a competitive Camaro race car, saving racers the time of building their own from the ground up and offering them the opportunity to compete with a piece of Chevrolet history, because we're only going to build a few of them," said Jim Campbell, General Motors U.S. Vice President of Performance Vehicles and Motorsports. "Add your powertrain assembly and you've got a race car that's ready to tackle the drag strip."

This new Chevrolet Performance Camaro drag racing rolling chassis package is ideal for those who were not fortunate enough to be one of the 69 people to buy a 2013 COPO Camaro, those who cannot deal with the $86,000 price tag or those who don’t care about being able to conform to NHRA Stock or Super Stock classes in terms of the drivetrain regulations. In other words, the new rolling chassis Camaro drag package allows a Chevy drag racer to install whatever engine, transmission and gearing setup desired rather than being limited to the three awesome engine options that come with the COPO package.

Aside from the freedom to drop in a monster blown big block V8, the new Chevrolet Camaro drag roller also allows the buyer the option to build their very own COPO Camaro race car. Even though GM only built 69 COPO Camaro drag packages for 2013, the company also sells the COPO Build Book, which includes the basic instructions and part numbers to build your own COPO Camaro. Now that the new rolling chassis package is available, the Camaro Build Book will allow buyers to build an exact replica of the new COPO Camaro with the only difference between the self-built rolling chassis and the COPO Camaro being the serial number of the turnkey package. In short, the biggest difference will be the variation in future collector’s value.

"Finishing off your race car with authentic Chevrolet Performance parts helps make it all-Chevy, with uncompromising performance and confidence-inspiring durability," said Campbell. "All of our hardcore racing parts have been designed and tested to standards unmatched in the aftermarket."

The Chevrolet Performance Camaro rolling chassis package comes with a variety of NHRA approved features including the chassis, suspension, braking components, roll cage, racing seats and a solid rear axle along with addition race-ready items like Bogart drag race wheels wrapped in Hoosier tires, a production style gauge cluster, a steering wheel, a racing switch panel and black carpeting. In terms of appearance, the rolling chassis Camaro package comes with the hood, grille, glass, headlights and taillights from the standard production Camaro SS. All of these cars will be painted Summit White.

The new Chevrolet Performance Camaro rolling chassis drag racing package goes on sale this Thursday (March 28th) at noon EST with a price of $55,000. Prospective buyers will call 1-800-306-3005 to order the rolling chassis package and buyers will be sent a certificate which customers will take to their local Chevrolet dealership to take delivery. These will be offered in limited numbers but GM has not announced just how limited the production run will be so if you want one - make sure to be on the phone this Thursday at noon.