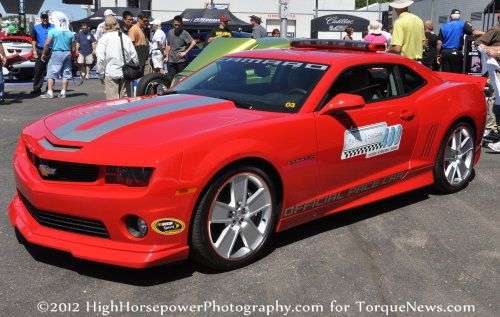 The Chevrolet Camaro did what it has not been able to do since April of this year, posting higher sales than the Ford Mustang and the Dodge Challenger in a month where the Mustang has been as close as it has been all year in passing the Camaro for the top spot in muscle car sales.
Advertisement

The Chevrolet Camaro moved 6,675 coupes and convertibles in August 2012. While this marks a 2.2% decrease in August sales comparing 2012 to 2011 along with being one of the worse months for the Camaro in the 2012 calendar year – it still allows the General Motors muscle car to claim the sales title for the 8th month of 2012. This month’s win breaks the Ford Mustang’s string of three monthly wins and a row and effectively brings the Mustang’s gain on the Camaro in terms of annual sales to a halt.

The Chevrolet Camaro has claimed the title of the bestselling muscle car in America each of the last two years but the strong months of May, June and July helped the Ford Mustang within some 600 units of catching the Camaro. However, with the Camaro outselling the Mustang in August 2012, the Camaro extends its lead to a margin of 916 units with 4 months left. Even though the Camaro holds a narrow lead over the Mustang, with 63,289 units sold through the first 8 months the Camaro is badly trailing the Mustang in terms of annual sales growth rate. GM has sold just 0.1% more Camaros in the first 8 months of 2012 than they did in that same period of 2011 where the Mustang has improved by 21% in January-August 2012.

The Ford Mustang saw incredible sales in May and June but a slumping July led to a terrible August for the original pony car, with FoMoCo selling just 6,387 units last month. That makes August 2012 the second worst month of the 2012 calendar year, better than only January’s 3,736 units sold. However, as I mentioned above, the Mustang has had a much better year in 2012 than it did in 2011 with 62,382 units sold in the first 8 months of 2012 accounting for a 21% improvement over the 51,564 units sold in 2011 during that period. The good news for Ford and their mighty Mustang is that the Chevrolet Camaro is still well within striking distance with 4 selling months left this year. That is a number that can conceivably be overcome in a single month and with the two muscle cars offering such similar lineups – there is really no clear and definitive choice in terms of which car is “better” that doesn’t come with a healthy dose of personal opinion.

Not to be forgotten, the Dodge Challenger moved 3,311 units last month which accounted for a 5% increase over August 2011. The Challenger rarely sells anywhere close to the volume seen by the cross town rivals but so long as Chrysler is happy with the Challenger sales figures – the company bigwigs are happy. On the year, the Challenger has seen 30,393 new units delivered to happy new owners, 13% better than their figures from the first 8 months of 2011.

Right now, the folks at Ford have to be cursing that brutally sluggish month of January as with a difference of 1,973 units between the Chevrolet Camaro and the Ford Mustang, January can quickly be pointed out in the battle of the muscle cars. Ford trails right now by 916 units so if the Mustang had managed to cut that deficit from January in half, sales are near dead even for the 2012 calendar year. Luckily, the Ford Mustang still has 4 more months in 2012 to catch up to the Camaro in an effort to prevent the GM muscle car from claiming its third straight annual sales title.

Tesla Contemplates A New Strategy for China Retail even As Sales Boom
Jay Leno on Elon Musk & EVs: “I Think He Should Get ... Credit"
END_OF_DOCUMENT_TOKEN_TO_BE_REPLACED