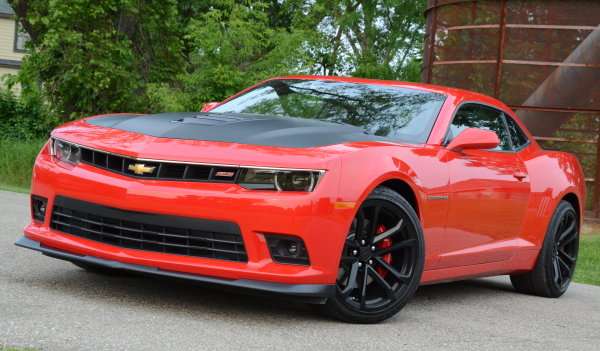 Camaro 1LE Rumored to Debut This Week in Chicago

There has been no official word from General Motors, but there is a persistent rumor floating around the social networks and the internet forums that the 6th generation Chevrolet Camaro 1LE will debut at this week’s Chicago Auto Show – introducing what could be a road-handling beast for shoppers on a budget.
Advertisement

The Chicago Auto Show opens to the media later this week and when it does, a great many people expect that the next generation Chevrolet Camaro SS 1LE could be among the big debuts. I am not sure where this rumor originated, but I have read countless discussions on message boards and Facebook about the likelihood of seeing a new road-gripping version of the Camaro SS in the Windy City. Unfortunately, there has been nothing from GM to confirm that the 1LE will arrive, but I am keeping my fingers crossed for a new muscle car in Chicago.

However, will it really be the 1LE, or will it be the new Camaro ZL1?

The Next 1LE Camaro
The 1LE package for the Chevrolet Camaro returned during the 5th generation as a high performance road-handling package based on the Camaro SS, and it is expected that we will see a new Camaro 1LE for the 6th generation as well – whether or not it arrives this week.

In the past generation, the Camaro 1LE was a Camaro SS with significant suspension upgrades (as shown above in red), including the front and rear roll bars, the front strut tower brace, monotube rear shocks and the lightweight wheels wrapped in sticky tires from the Camaro ZL1. It also has the fuel pump and the wheel bearings and shock mounts from the ZL1, along with a close ratio manual transmission and bigger gears than the standard SS.

I expect that the 6th generation Camaro 1LE will be a great deal like the 5th generation model, serving as a super handling package for the Camaro SS. I expect to see lightweight wheels and high performance rubber, high performance suspension components with the magnetic ride control system and bigger gears than what you get with the Camaro SS. When you combine those upgrades over the Camaro SS to the basic improvements of the 6th gen Camaro over the 5th gen, this new Camaro SS 1LE should be an incredible road racer.

The “problem” that I have with the Camaro 1LE debuting later this week is that the 5th generation 1LE used features of the Camaro ZL1. The ZL1 hasn’t been introduced yet and trying to introduce the ZL1 later with bits from the 1LE could create a marketing issue, so I wonder if GM will really introduce the SS 1LE before the ZL1?

That brings us to the other possibility – that General Motors will roll out the 6th gen Camaro ZL1 this week in Chicago.

It Could Be the New ZL1
Of course, there is also the fact that we have seen spyshots showing what is most likely the 6th generation Chevrolet Camaro ZL1. Likely to be powered by the same supercharged LT4 that motivates the Corvette Z06 to the tune of 650 horsepower and 650lb-ft of torque, the Camaro ZL1 will likely have that blown V8, big brakes, some unique body appointments, big tires and a magnetic suspension setup. This would be a halo model like the 5th gen Camaro ZL1, with premium amenities inside, an optional automatic transmission and a convertible – making this a hot option for those folks who want to be comfortable while driving the most powerful Camaro ever.

If it happens, of course.

Stay tuned for our coverage from the 2016 Chicago Auto Show!