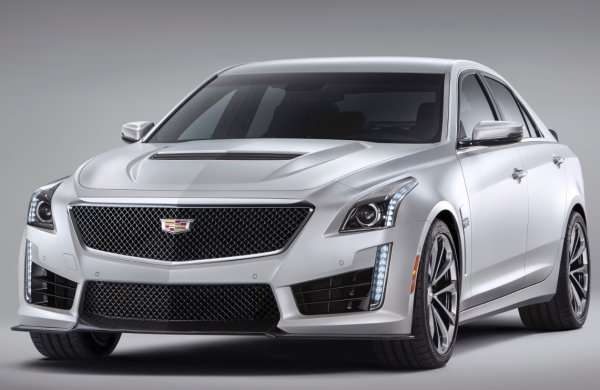 The 2016 Cadillac CTS-V will be powered by the same LT4 V8 as the 2015 Corvette Z06 and even though the high performance Caddy has slightly lower power ratings than the newest super-Vette – the 2016 CTS-V could actually offered more consistent performance over extended periods of high performance driving.
Advertisement

When 2016 Cadillac CTS-V debuts at the 2015 North American International Auto Show in Detroit next month, it will pack the same LT4 V8 as the 2015 Chevrolet Corvette Z06 which was introduced earlier this year at the Detroit show. The Cadillac is bigger and heavier than the Z06 while also having slightly lower power ratings of 640 horsepower and 630lb-ft of torque compared to the 650hp and 650lb-ft in the Corvette. Based on those simple facts of less power and more mass, the Cadillac will almost certainly offer lesser performance on paper. However, things could be a little different in the real world due to GM’s decision to pull power from the new Z06 when it gets hot – a problem which the new Cadillac CTS-V is likely not to experience to the same extent.

LT4 Power in the Z06
General Motors has caught a bit of bad publicity recently when it was announced that their new 2015 Chevrolet Corvette Z06 pulls power when the engine gets hot. In order to keep the engine running safely for the duration of the warranty period, the Z06 LT4 is designed to adjust engine parameters when hot to help prolong the life of the engine. Unfortunately, adjusting those parameters to keep the LT4 running strong for years comes with a reduction in power – one which the first Corvette Z06 owners have been quick to point out. GM has billed the new Z06 as the most track capable Corvette of all time, but some people are questioning the track-readiness of a car that actually gets slower as the race goes on.

GM insists that this power reduction was necessary to prolong the life of the Corvette Z06 LT4 engine, but while Ford has offered 662hp in the Mustang GT500 and Chrysler is offering 707hp in both of the Hellcat cars without any power reduction. I have spoken to a few people who are not with an automaker, but they are familiar with the world of high performance. Those folks believe that the GT500 Mustang and the Hellcat Challenger both benefit from a large front end with lots of surface space. This front end space equates to plenty of engine intake air and engine cooling air being channeled into the Ford SVT V8 and the Hellcat Hemi, but the super aerodynamic front end of the Corvette Z06 likely doesn’t offer the same impressive airflow into the engine bay as the less aero-friendly Mustang and Challenger.

Basically, the Corvette Z06 is so aerodynamic that it runs into cooling issues that aren’t experienced by the like of the 707hp Challenger or the 662hp Mustang.

LT4 Power in the CTS-V
When the new 2016 Cadillac CTS-V this the street with the LT4 engine delivering 640hp and 630lb-ft of torque via the 8-speed automatic transmission from the Corvette Z06, it won’t be as aerodynamic as the Vette as, like the Mustang and Challenger, the big Caddy sedan has lots of front surface space that should afford it plenty of cooling air under heavy load. Due to this increase cooling air flow, GM could be less aggressive in de-tuning the LT4 V8 in the CTS-V when it gets hot so unlike the Corvette that loses power when it gets very hot, the new Cadillac could run cooler under load and that would allow GM to pull less power – if they have to pull power at all.

Should the new Cadillac CTS-V run cool enough under load to prevent detonation like that being experienced in the Corvette Z06, the high performance luxury sedan could offer more consistent performance over long periods of high performance driving. I don’t expect that this will allow the CTS-V to beat the Corvette in a race, as it is still quite a bit bigger and heavier, but CTS-V owners may be able to push their cars to the limit for longer periods of time without the frustrating power losses being experienced by 2015 Corvette Z06 owners.

Carl wrote on December 26, 2014 - 11:03pm Permalink
You mention that the z06 has cooling issues. Could you give your source for this?
DrivingBy wrote on December 27, 2014 - 6:12pm Permalink
The CTS-V with all its additional heat exchangers and beefier driveline gained only about 150# over the also boosted V6 V-Sport, so it should have nearly that car's ideal weight balance. Sounds like a great car, but the the price I think GM should have used the Corvette transaxle, which moves the transmission's mass and heat to the rear axle. They have the 2 toughest items, the transaxle and it's testing already done, so a couple low-volume stampings (a different floor) and other small changes isn't unreasonable. That would make the car more fun by taking mass off the nose, heat stable by opening a big chunk of engine room space and faster with less wheelspin.
Shawn wrote on December 27, 2014 - 8:25pm Permalink
GM has stated that Z06 ECU power reduction will not be an issue once the 500 mile break-in period is surpassed. There is an amber circle illuminated during the break-in period which turns off once 500 miles is achieved.