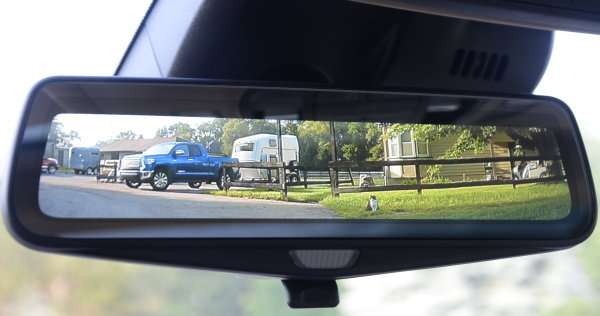 The Cadillac CT6 Rear View Mirror is Technology Everyone Can Use

I recently had a chance to spend a week driving the 2016 Cadillac CT6 and while I will soon have a full review of this impressive new luxury sedan, one piece of the unique luxury technology that really stood out to me was the new camera-based rear view mirror – as this is technology that everyone can use and appreciate.
Advertisement

Earlier this year, we talked about the approval of the Cadillac CT6 rear view camera-based system by the federal government and while I talked about the function of this system back then, it was hard to really appreciate the technology without experiencing it. The system uses the backup camera system to display the rear-view image in a screen which happens to be the size and shape of the standard rear view mirror. It sounds like a cool feature on paper, but having spent a week driving the CT6 with this technology, I believe that this is one innovation that should spread across the entire auto industry.

The Cadillac CT6 rear view video mirror system offers a far better view of what is going on behind the vehicle than the standard rear view mirror that we all have in our current vehicles. This setup affords the driver a better view in those situations where a good look is the most important, such as backing up in your driveway, changing lanes in traffic or backing out of a tight parking spot between two larger vehicles. If you don’t like the camera display, you can flip the switch and go right back to a traditional rear view mirror, but I expect that once drivers get accustomed to it – everyone will love it.

Best of all, I found a way to showcase just how much of a difference the Cadillac CT6 rear view camera mirror system works in a frosty morning in Metro Detroit.

The Cadillac CT6 Function on Display
One of the mornings when I was driving the 2016 Cadillac CT6 was unseasonably cool and as a result, the car was covered in a layer of front early in the morning. Because of that, visibility through the rear window – via the rear view mirror – was very poor. However, there was no moisture or frost on the rear view camera, so when the mirror was flipped to the camera mode, everything behind the vehicle was crystal clear.

So, I grabbed my trusty Nikon and made a short video of the Cadillac CT6 video mirror in action. At first, I had the mirror on camera mode and in this view, you can clearly see a Toyota pickup hooked to a horse trailer, a house and a fence directly behind the house. I then flip to the “normal” rear view camera display, and between the frosty rear window and the headrests, you can barely make out the horse trailer and the house, while the fence is barely visible at all. Of course, the field of vision (and my camera being in the way) cuts the truck out, but in short, you really cant see any detail through the standard mirror. I then flip back and forth between the camera view and the standard mirror view, offering a great look at the difference in views between the two modes.(More on Page 2 - including Video.)

Notice that late in the video, a small, fluffy cat wanders out of the yard behind the Cadillac CT6. In the standard mirror, I wouldn’t have been able to see her at all if I was backing up and really, even seeing the mirror while backing up could be an issue. However, with the rear view camera mirror system, the cat and the fence are unmistakable. For someone with kids or pets, this system could prevent backing over a fluffy car or, less dramatically, crushing someone’s bike or favorite toy on a frosty morning. It also makes backing out of a driveway on a cold morning a whole lot easier.

Check out the video for a closer look at the Cadillac rear view mirror in both modes.

Of course, when driving on the highway, the Cadillac CT6 rear view camera mirror system provides a much better view of the area behind the car. While the standard mirror only shows what you can see through the rear window, cutting off much of what is below the sight line and off to the sides. The rear view camera mirror mode offers the same range of vision as most backup cameras, but it does so with remarkably clear detail. This limits blind spots a bit and gives the driver a much better look at the vehicles off of the rear corner of the CT6, making lane changes in city traffic far safer for everyone.

This technology takes some getting used to, as the Cadillac CT6 camera-based rear view mirror system offers so much information at first, the driver needs to adjust to where to look. The items in the camera look a little further away than they do in the standard mirror view, but once you get accustomed to the system – it is an awesome feature that I believe we will someday see in every new vehicle.

Ed K wrote on September 27, 2016 - 8:04pm Permalink
Big flippin' deal. Our 2016 Accord puts the rear view on a nice, big, clear screen on the dash. It can be adjusted for normal width, extra wide or looking down at the rear bumper. Not only is the rear view excellent, but a side camera shows what's on the right side when turning or changing lanes. Want to have a look at that right lane before signaling? No problem. Just tap the button on the end of the turn signal lever. All for at least $10K less.
Robert wrote on September 28, 2016 - 11:03am Permalink
It IS a big flippin' deal. Your Accord does NOT show the rear view while driving down the road as this does. It's intuitive - we've been used to looking in a rear view mirror all our lives. Indeed, Cadillac has blind spot warning detectors that are automatic, you don't have to push a button. And on some models the seat rumbles if a car is in the other lane. When backing a bigger view is displayed on the GPS screen. Cadillac technology is fantastic.