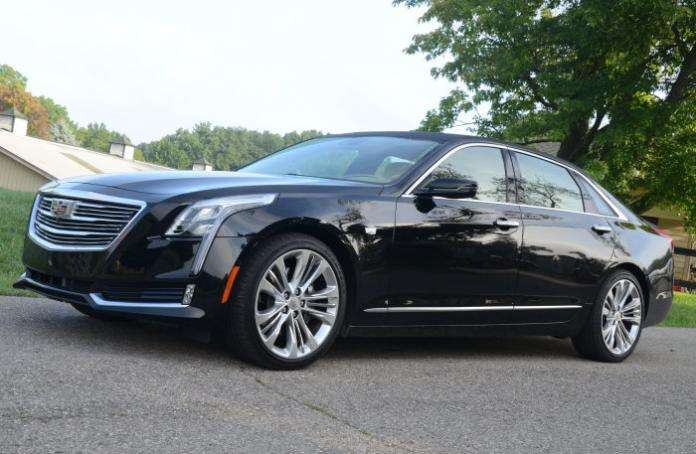 The popular Cadillac CTS and the not-so-popular ATS and XTS will all be replaced by two new models – the new Cadillac CT5 and an unnamed small sedan – when the life cycle of those current models ends in the next two years as GM’s premium luxury brand looks to cut down on the number of sedans in their portfolio.
Advertisement

The Cadillac CTS has long been the most popular model from GM’s luxury brand. In fact, the CTS is so popular that when GM began their new naming process, the automaker based the new names around the midsized sedan. The first model included in the new CT-based naming process was the CT6 and based on a report from Reuters, the next new model will be the CT5.

The Cadillac CT5 will be slightly smaller than the CT6 (shown above), so it comes as no surprise that the CT5 will replace the CTS, but it does come as a bit of a shock that when the CT5 arrives, the smaller ATS and the larger XTS will leave the lineup when the life cycle of their current iterations comes to an end. The ATS will not have a direct replacement, but there is a new smaller luxury sedan planned for the near future which will sit below the CT5 in the brand portfolio. In other words, while the CT5 and the new small sedan might not technically replaces the CTS, XTS and ATS, those three vehicles will not continue into a new generation while the CT5 and the unnamed small sedan fill the slots below the range-topping CT6.

The 2020 Cadillac CT5
When the new CT-based naming process was introduced for the 2016 Cadillac CT6, a large luxury sedan, it seemed like it was only a matter of time before the popular CTS received its new name. Based on a discussion between Reuters and Cadillac brand boss Johan de Nysschen, the CTS as we know it will not continue on after the 2019 model year, as it will be replaced by the new Cadillac CT5. This makes sense, as the company went so far as to plan to give their cars names which begin with CT and end with a number, with CT6 being the large sedan and the other, lower number models to sit below the CT6 in terms of sizing and pricing.

What comes as a bit of a surprise is that when the current CTS ends its current cycle in 2019 to make way for the new CT5, the smaller ATS and larger XTS will also be discontinued, so while the new CT5 will physically replace the CTS – GM plans to effectively replace the ATS with a new small sedan.

Based on this, we can expect that the 2020 Cadillac CT5 will be a bit smaller than the current CTS, so it will leave a bigger gap between itself and the CT6 while also appealing (in theory) to buyers who were previously considering the ATS or CTS. The Reuters discussion mentions that the CT5 will target buyers who want to be in the $35,000-45,000 price range while the large CT6 will cater to those buyers who want to spend a little more.

Changing the Face of Cadillac
Prior to the CT6 being introduced for the 2016 model year, the Cadillac brand had five basic vehicles. From the car side of things, Cadillac offered the compact rear-drive ATS sedan and coupe, the midsized rear-drive CTS sedan, the full size front-wheel drive XTS sedan and the electric-powered ELR and on the utility vehicle front, the luxury brand offered the massive Escalade and the smaller SRX.

We know now that the 2020 Cadillac CT5 will replace the CTS, and sometime after the CT5 arrives, there will be an even smaller Cadillac sedan which will compete with the likes of the Audi A3. If I had to guess, I would peg this smaller car as the CT3, leaving Cadillac some room to add another model between the smallest model and the new CT5. There is no word right now as to what will happen with the current ATS coupe and the ELR has already been removed from the lineup. As for the XTS, while it will leave the lineup at the end of this generation, this model was really replaced two years ago by the CT6, although the brand continued to offer the front-drive XTS.

When the CT6 was introduced as a second large luxury sedan, it seemed likely that it would replace the front-drive XTS, but two model years later, the company still offers two large sedans. Even though one is based on a rear-drive platform while the other is based on a front-wheel drive design, it seemed unusual that Cadillac would continue offering two large, luxury sedans. With the news that the XTS will not continue on after 2019, it seems that it is being replaced by the CT6 – it just took a few years for GM to figure out just how they want the Cadillac brand to look.

The bottom line here is that in the next few years, Cadillac will cut down on the number of cars offered, resulting in a simple lineup of three cars (CT5, CT6, new small car) and two SUVs (XT5, Escalade).

Fed wrote on August 7, 2017 - 8:00pm Permalink
My thinking is the CT5 will be slightly bigger than the current CTS to eleminate a couple of its major complaints rear seat room and trunk space. I also think the CT6 will gro closer to the proportions of Escala to better compete with the M and 7 class. At least that would be the way I would do things. But I am just a dreamer and not a car executive.
George Shanks wrote on December 22, 2017 - 5:04pm Permalink
I have a 2016 ATS-V coupe. I'm looking forward to the CT5 V coupe that will, I hope be just a little larger and even more powerful.