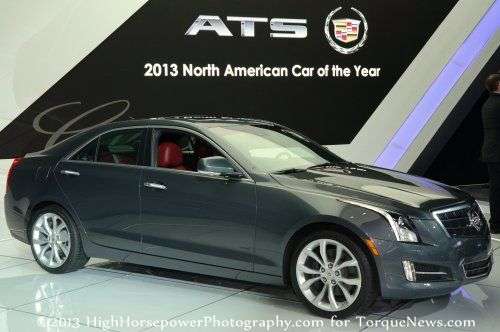 Last night while I was out gathering some data on my most recent test vehicle, I saw a Cadillac ATS test “mule” driving near the General Motors Milford Proving Grounds that appeared to have a vastly more aggressive exterior design – leading me to believe that it was either the ATS-V or a new ATS VSport package similar to the freshly announced 2014 CTS VSport.
Advertisement

The car that I believe to be a Cadillac ATS-V test mule that was cruising through Milford Michigan looked like so many of the other GM mules seen touring the local streets with rough white paint, randomly checkered body panels here and there, an unfinished looking grille and roughly painted black wheels. The car was driving towards me in traffic and the awkward checkered camouflage caught my eye as it often does and while there are plenty of normal ATS mules on the local roads – this car was different.

This possible Cadillac ATS-V mule clearly had a lower stance than the current production version of the compact Caddy sport sedan and the lower front fascia differed from your run of the mill ATS. The lower fascia openings didn’t have any chrome or fog lights but that isnt unusual for test mules What most ATS mules don’t have is larger vents along the lower fascia with a fascia that extends further to the ground with a bit of a flare towards the outer edges where the front end wraps around to the wheel openings. Also, like the current CTS-V lineup, this car appeared to have a “chin” on the front end that extended outward where the production ATS fascia tapers inward at the bottom.

As this mystery Cadillac went by, I got a good look at the back end and unlike the production ATS that has dual exhaust tips that are located closer to the middle of the vehicle – this suspected ATS-V test mule had a much more aggressive, splitter style rear diffuser with quad exhaust tips mounted towards the outer edge of the back end. While the front end looked like an enhanced version of the normal ATS front end, the back end made it clear that this was not an average ATS. The back end was otherwise masked up but the aggressive diffuser and quad exhaust tips were unmistakable.

Once the long row of traffic which the Cadillac ATS-V test car led clearly, I immediately turned around in pursuit of this sporty Caddy mule. Unfortunately, I got caught at a red light and by the time I caught up to the rest of the group of vehicles in which the Cadillac mule was driving, we had gotten to the interstate – with no clear indication as to which direction the ATS had gone. I picked a direction, getting on the highway and hurrying through traffic for a few miles with my camera phone poised for some choice spyshots but it proved to be futile as the test mule had either gone the other way or he had made enough progress while I was stuck at the light that I was not going to catch up.

Of course, this sporty Cadillac ATS test mule could be nothing more than a test car with body panels that will never see production but with so many rumors of an ATS-V coming in the next year, I fully believe that I spied one of the ATS-V or VSport engineering test cars being driven home from the GM test facility. Needless to say, my camera will accompany me on all of my local travels and should I see this vehicle again (and I see a ton of GM mules around here), I will be sure to get a picture or two next time.